These People Don't Understand the Law 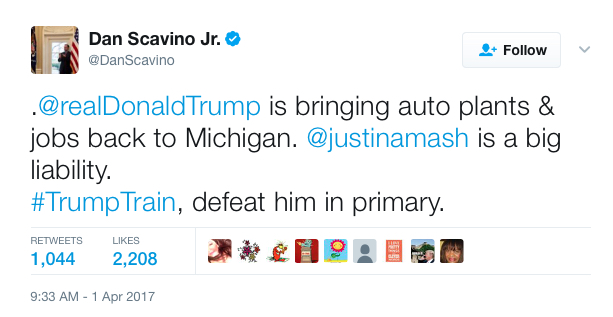 I like Richard Painter and his crazy media statements are entertaining as hell, but I don't think he understands that none of the people working for Trump know anything at all about the law:

A senior adviser to President Donald Trump on Saturday urged a primary challenge against a House Freedom Caucus member, prompting charges that he may have violated federal law against using his official position to sway an election campaign.

Dan Scavino Jr., director of social media and senior White House adviser, tweeted that Michigan Rep. Justin Amash is a "big liability" for the state and encouraged a GOP primary opponent to oust him in 2018.

But that tweet, sent from Scavino's personal Twitter account, immediately landed him in controversy as ethics lawyers called out Scavino for possibly violating the Hatch Act, a Depression-era law that regulates campaigning by government officials.

If none of Trump's other violations of norms and ethics laws--hello, nepotism laws, anyone?--are going to matter, then what this clown said won't matter, either.

They are traitors, they're looting the treasury, and this is what happens when one party controls two of the three branches of government. All it will take for Republicans to suddenly discover their love of the rule of law is for a Democrat to occupy the White House.

And, oh by the way, there wouldn't even be an auto industry in America were it not for President Obama.