The Democratic Party is the Party of Choice 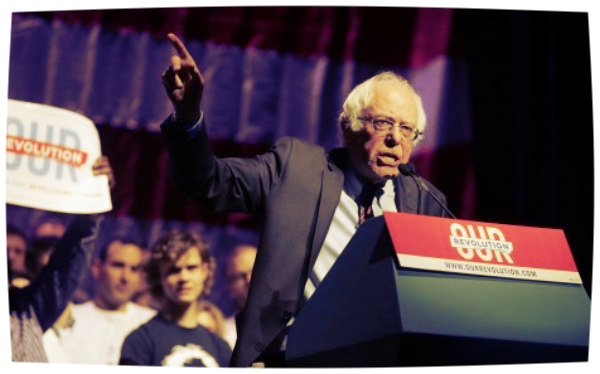 You can put me in the category of "hell no" when it comes to what Bernie Sanders is trying to sell:

The reviews of the Democratic National Committee's national "unity tour" with Sen. Bernie Sanders and Chairman Tom Perez have been mostly negative. The Republican National Committee flooded reporters' inboxes with bad headlines from the past week and even the liberal New Republic declared the effort "failed."

There was plenty of grist for the critics: Boos for Perez; blowback from pro-choice groups for Sanders; and even, as if proving the curse, the collapse of an American flag behind Perez during a live interview on MSNBC.

The whole point of the latest endeavor was to put Perez, the new party chief, in front of Sanders' most loyal supporters in key spots around the country to try to begin to earn their trust — even if that starts with letting them vent. Thousands turned out to see the Vermont senator in Portland, Miami and Las Vegas, where the tour concluded Saturday. Perez was the opening act; Sanders the closer.

Whether each of them likes it or not, the Democratic party and Sanders will need each other to survive in Donald Trump's America.

Sanders is the most popular politician in either party, several recent polls have found. More than four-in-10 Democrats — about 13 million people —  him over Clinton in last year's primary, and they've stuck with him with a loyalty that any politician would envy.

"Four in Ten" is a polite way of pointing out that Sanders lost, and was buried in the primary, despite the overwhelmingly negative interference of pro-Trump and pro-Russian "fake news" bots. Sanders continued his primary fight well into the spring months AFTER he had lost any chance at the nomination, and if he had bowed out when the race was lost, it would be more like "three in ten."

Give me a break with this guy. He's popular because he promises the moon without paying for the ride there.

We need "saving?" We won the popular vote. We'll adjust and win the Electoral College the next time around. We elected Barack Obama twice. We don't need saving. We need the fucking FBI and the Russians to get their goddamned thumbs off the scale. That trick worked once and it ain't working again.

I'm sorry, but fuck this shit. The reproductive rights of women are under assault everywhere in this country where there's a white Republican male who fears that he hasn't done enough to alienate women and frighten the base of the Democratic Party. Bernie Sanders better realize one thing--this is a pro-choice party. We may be accepting of candidates that oppose abortion, but that's only because there are certain areas of rural America that are insane. Otherwise, no--we are not going to abandon women to their fate. This party better stand up for Planned Parenthood and it better stand up for the rights of women.

Otherwise, what's the point? And being extreme is no vice. How many pro-choice Republicans are there, really? Are they running anything? Are they in charge of anything important?