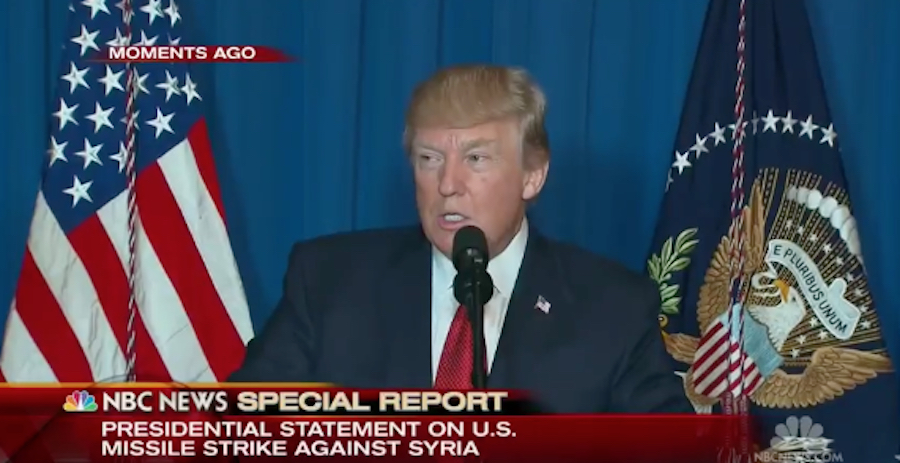 Just so we're clear, an old man with anger issues and deep ties to the Russians decided that the 100th anniversary of the U.S. entry into World War I would be the right day to send a volley of cruise missiles into a Syrian air base used by, um, the Russians:

The United States launched dozens of cruise missiles Thursday night at a Syrian airfield in response to what it believes was Syria's use of banned chemical weapons that killed at least 100 people, U.S. military officials told NBC News.

Two U.S. warships in the Mediterranean Sea fired 59 Tomahawk missiles intended for a single target — Ash Sha'irat in Homs province in western Syria, the officials said. That's the airfield from which the United States believes the government of Syrian President Bashar al-Assad fired the banned weapons.

There was no immediate word on casualties. U.S. officials told NBC News that people were not targeted and that aircraft and infrastructure at the site were hit, including the runway and gas fuel pumps.

And he did it from his vacation home! On or about what seems to be the 75th day of Steve Bannon's presidency, which might be coming to an end soon. Who knows? How much do you want to bet they had to tell Trump more than once that it would be a bad idea to use nukes?

I'm not as sanguine as others on this. Yes, the Assad regime deserves to have its Air Force destroyed on the ground, like we did with Saddam Hussein. Yes, we need to find a political solution that will end the civil war in Syria. But, no, this was a mistake and it will draw a response that we are not ready for. It will complicate an already volatile relationship with Russia, which may or may not already own the asses of half the people working in the West Wing.

There's a reason why President Obama never did this. One, it doesn't last in terms of a deterrent. Two, no one in the Republican-controlled Congress wanted to do it. And, three, no one could come up with a reason to punch below America's weight at a tin-pot dictator propped up by a kleptocratic Russian goon squad.

You want to punch someone? Get ready to be punched back. Syria and its allies have missiles of their own. They can take out planes, they can fire missiles at civilian targets, and they can even fire at ships at sea. That does not mean we should fear them militarily, but it does mean that we had better be ready for a war in the Middle East that involves previously unheard names and will involve Americans risking their lives. In no small way are the Israeli people in harm's way right now as well. There are Israelis sitting on the Golan Heights, staring down at a powder keg. Who's got a match?

Every single American in that part of the world just became a target for someone looking to avenge a pock-marked runway. For what? What is worth dying for in Syria? I still haven't been told what's worth dying for in Iraq. This is folly carried out by weak men led by a proven maniac. You fired 59 Tomahawks at a military airfield. How long will it take for that facility to be up and running? How many bunkers do you think you destroyed? How long before a Syrian plane symbolically and defiantly takes off from that airfield? How many Tomahawks are you ready to spend?

And let's never forget that Trump's own speech tonight was full of ad-libbed confusion and bizarre imagery. God bless the whole world? Even the part you just bombed? What the hell? It has finally come down to a moment that tests the pucker factor. A president, suffering from dementia-like flights of fancy, who cannot be left alone and has to have family members at arm's length at all times, just escalated a shooting war in the Middle East.

UPDATE: Apparently, Trump is listening to Hillary Clinton. Well, don't I have egg on my face.