North Korea is a Fake Problem Created by Desperate Men 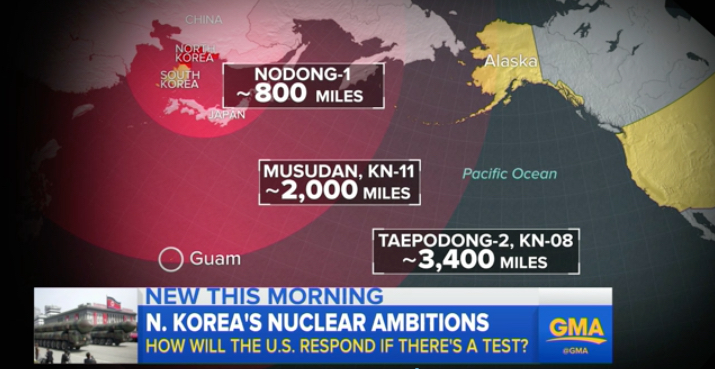 North Korea is a tissue tiger and it is more of a threat to its own people than it is to anyone else. It is a poor, backwards country that is held together with terror and a cult of personality revolving around a morbidly obese third-generation fool. It is a fake problem created by the Trump regime's fever dream about looking tough:

Hours after North Korea paraded its weaponry and attempted a missile launch, President Trump's national security adviser said the U.S. leader will not allow Kim Jong Un’s regime to have the capacity to threaten the U.S.

"While it's unclear and we do not want to telegraph in any way how we'll respond to certain incidents, it's clear that the president is determined not to allow this kind of capability to threaten the United States," Lt. Gen. H. R. McMaster told ABC News' Martha Raddatz in an exclusive interview on "This Week" Sunday. "Our president will take action that is in the best interest of the American people."

North Korea rolled out ballistic missiles and other weaponry at a huge parade Saturday and later in the day, at 5:21 p.m. ET, made a failed attempt to shoot off a missile, which exploded immediately after launch.

McMaster said the launch "fits a pattern of provocative and destabilizing and threatening behavior on the part of the North Korean regime."

"I think there's an international consensus now, including the Chinese and the Chinese leadership, that this is a situation that just can't continue. And the president has made clear that he will not accept the United States and its allies and partners in the region being under threat from this hostile regime with nuclear weapons," said McMaster, who spoke from Kabul, Afghanistan.

This "provocative and destabilizing and threatening behavior" has been going on since the 1950s. They can now set off underground nuclear weapons. So what?  North Korea is surrounded by nation/states that can wipe it from the map if it detonates an above-ground weapon that affects anyone except for North Korean territory itself. There is no crisis here, only an opportunity for the Trump people to fall on their face in front of the world trying to solve a problem no one cares about.

China, Japan, and South Korea all care about one thing--markets, trade, and economic prosperity. They tolerate North Korea because they are all getting the raw materials needed to continue building their economies, one way or another. To have a poor, backwards country in their midst ready to sell everything they have is by design otherwise they would have found a solution decades ago. The fact that the U.S. has been caught up in this is proof we're getting something out of it, too.

You're telling me that, all of a sudden, North Korea is a front page problem we have to deal with immediately? Please. Trump needs a war to stave off public opinion. Why let him manufacture one?

If we provoke North Korea, they'll rain destruction down on everything within range of their military forces on the border between the two countries. South Korea will suffer immediately, and the region will become destabilized. The world will feel the loss of South Korea's economy within days or weeks. Why provoke this? Why start this now?

And shame on General McMaster. His presence among these maniacs does not mean he won't be held responsible for carrying out the policies that are leading us down this road. In any decent administration, he wouldn't behave this way because he wouldn't have to. Carrying water for Donald Trump is going to continue to put people on the wrong side of history and the law.