It's Okay When White People Do It 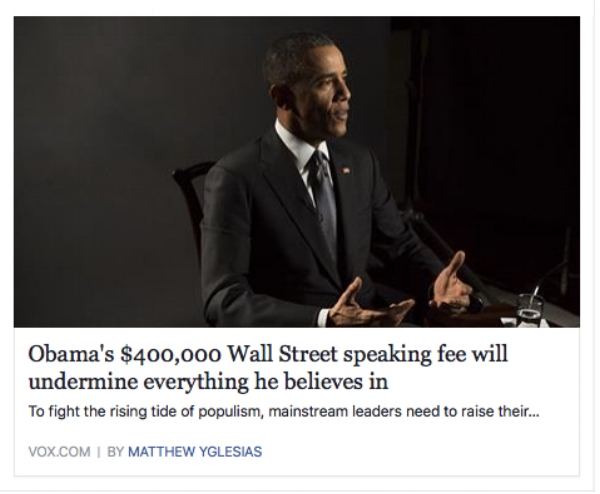 Never mind how ridiculous it is for people to complain about how President Obama is going to get paid to speak to people who are willing to pay him for his services (that's capitalism, by the way). Never mind how silly it is for a white guy who gets paid to write things on the Internet to complain about how a successful former President is going to raise money for his foundation, his daughters, and his future (nobody said shit when Reagan, Bush, or Bush did exactly the same thing). Never mind how stupid all of this is (and, boy, is this a humdinger).

What matters is that what President Obama does now means his entire presidency was a failure if he doesn't hide in a cave and give away all his money and say nice things about Republicans. This is all courtesy of an obsequious media that is simply not going to be bothered about hundreds if not thousands of conflicts of interest regarding the Trump family and his cabinet appointees. Matt Yglesias, what the hell were you thinking? Oh, this will get some clicks! Woo hoo!

Obama should take seriously the message it sends to those young people if he decides to make a career out of buckraking. He knows that Hillary Clinton isn't popular with the youth cohort the way he is. And he knows that populists on both the left and the right want to make a sweeping ideological critique of all center-left politics, not just a narrow personal one of Clinton. Does Obama want them to win that battle and carry the day with the message that mainstream politics is just a moneymaking hustle?

"I never said I didn't pay taxes," Trump maintained. "[Hillary Clinton] said, 'Maybe you didn't pay taxes.' And I said, 'Well, that would make me smart,' because tax is a big payment. But a lot of people say, 'That's the kind of thinking that I want running this nation.'

Remember, kids. It's only stealing if you're black.