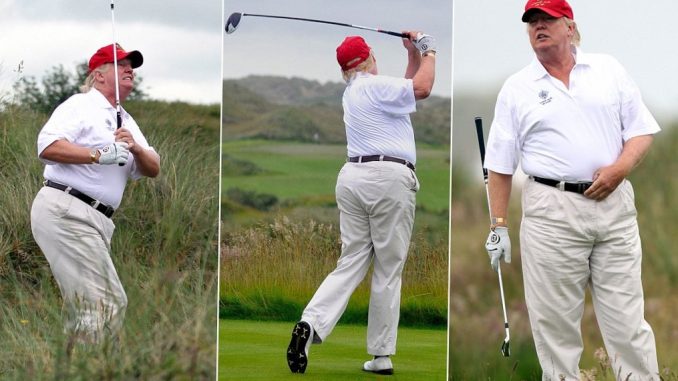 During 2015 and 2016, we heard a lot about Hillary Clinton's appearance and stamina. What's striking is that no one seems to acknowledge the fact that Trump has a huge ass and a huge gut and looks like he's about to wheeze and fall over:

Trump appears to assert his presidential fitness less by action than association. Over the years, he’s made his connections to renowned athletes widely known, on TV news and via Twitter. Throughout his campaign, Trump bragged about friendships with, and endorsements from, dominant—and often controversial—sporting stars, like former NBA player Dennis Rodman, Patriots quarterback Tom Brady, and boxing heavyweight Mike Tyson.

Perhaps Trump’s most influential sporting connection is with World Wrestling Entertainment, the lucrative network on which wrestlers enact fictional storylines in staged fights. His relationship with the brand dates back some 30 years and has involved hosting events at his venues, appearing at promotions, and being inducted into the Hall of Fame. The company even infiltrated his cabinet, with former WWE CEO Linda McMahon now heading the Small Business Administration.

Much like reality TV, in the WWE—where the pins are planned and the pain is feigned—entertainment matters more than actuality. During the presidential campaign, Trump applied this idea outside the ring, diverting attention about his questionable health by belatedly revealing his medical results on an episode of Dr. Oz. Not long after, he released a superlative-ridden letter from his physician claiming his blood pressure and lab results were “astonishingly excellent” and that his medical exam showed “only positive results”—even though his BMI indicated he was clinically overweight. (His physician later admitted to writing the letter in five minutes and suggested that his overwrought language was influenced by Trump’s own rhetoric, which spawned another round of chatter and media coverage).

Lost in the controversy over his refusal to release his tax returns was the fact that no one has a clear or accurate picture of Trump's health and wellbeing from the viewpoint of a reliable source. We don't know what he suffers from, if at all, and we don't know exactly why he looks like an orange beanbag listing to one side.

If Trump were a Democrat, this is all you'd hear. You'd read endless think pieces on how his inability to stay in shape or embrace exercise was proof of a lazy mind and an unserious personality. The fact that he's an old white man who self-identifies as a Republican means he can look however he wants because the standards are far lower for him.