Emily Steel Has Made America a Better Place 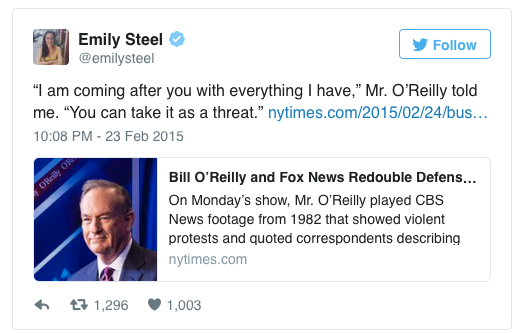 If you don't know who Emily Steel is, I don't blame you. I had no idea who she was either. Steel is the reporter who is responsible for driving Bill O'Reilly off the air:

In an episode of the Daily podcast from the Times after O'Reilly's ouster, Steel described spending months investigating the claims against the host in the face of "resistance" from the network.

"We were just trying to follow the facts of our story," Steel said. "We really had to dig to get this information. There's a reason why these settlements were for so much money, was to keep these women from talking. There was a lot of resistance."

According to Steel, she was surprised when O'Reilly was fired. The network has protected its marquee host for a long time, she said, through past allegations and other controversies.

In 2015, Mother Jones alleged that O'Reilly had falsely claimed to have reported from the Falklands in 1982 — and even saved his photographer while covering the war — when he had instead apparently covered protests in Buenos Aires. O'Reilly threatened Steel on the record to come after her with "everything I have" if he felt her subsequent coverage for the Timeswas inappropriate.

In a day and age where there aren't many heroes, Emily Steel certainly deserves our thanks for doing something few people would have the guts to do.