Donald Trump is Afraid of the Press 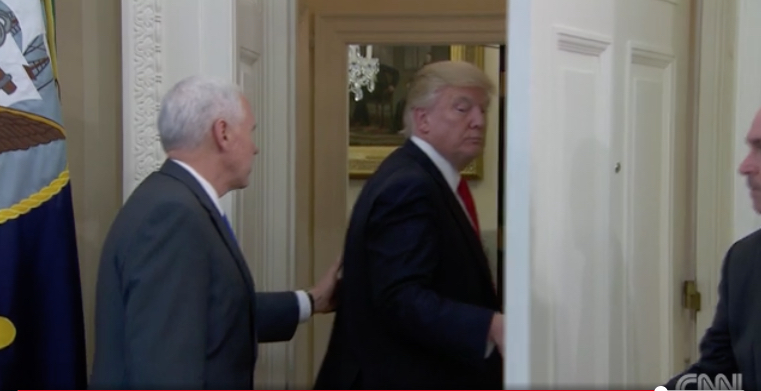 This is the moment where Donald Trump fled the room. This happened today, during some clumsy event where he was supposed to sign two executive orders related to trade policy. As he was stumbled through the room like he'd never been there before and had no idea what he was doing, he was asked a question he did not like and so he walked over to the door you see in this screenshot and opened it and tried to walk out.

It's as if the press was one of the wives he doesn't want to deal with right now.

It's a hapless regime he leads. The D-list talent, the incompetence, the greed, the concentration of wealth, the endless parade of inconsistencies, nastiness and the overwhelming presence of a conflict of interest every time he tells one of his kids to do something--it's horrible.

Donald Trump fleeing the room when the press asks a question is proof that everything is a shambles. This is the biggest fiasco in American history. At no point have we ever been led by such deranged lunatics.

My guess is that someone else is going to have to be fired for this embarrassing display of organizational dysfunction. It's hard to screw up a one-car parade. You bring the Vice President and the President out, they say something innocuous, you sign the orders, you let the photographers click away, and then you walk out. Donald Trump couldn't make a one-car parade work if you spotted him the car and the crowd and a nice day.

In terms of presenting command authority and presence, these people around Trump rate a zero. There is a certain elegance that is demanded of the president when he appears in public. He has to be confident, and he has to inspire people when he makes the attempt to connect with his voters and his supporters (you should not be naive enough to think a president's detractors won't automatically see a buffoon every time he appears). There is a certain dignified composure Trump will never posses. He will never be able to stand there and say something tolerable and decent about another human being, not without flashes of resentment, not without trying to make everything about himself, and certainly not anything that gives someone he is not related to any kind of benefit. He will never look or act presidential because he is, most emphatically, not presidential in any way, shape or form.

He is a clod, fumbling for the door, afraid they'll figure out who he really is. That's all.

UPDATE: Here's the scene, edited to look like the closing credits for Veep.