Don't Tell the Enemy What You're Going to Do 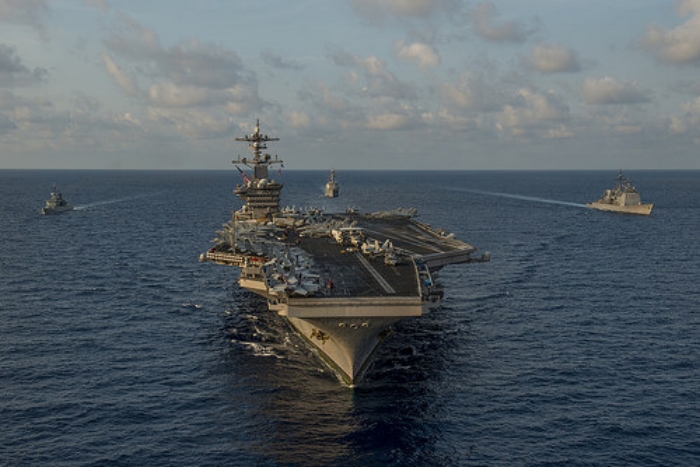 The U.S.S. Carl Vinson group is now headed to the Korean Peninsula.

A US aircraft carrier-led strike group is headed toward the Western Pacific Ocean near the Korean Peninsula, a US defense official confirmed to CNN.

The move of the Vinson strike group is in response to recent North Korean provocations, the official said.

Correct me if I'm wrong, but didn't Trump say that, if he was president, he wouldn't tell the enemy what he was going to do? Remember when we bombed Syria? We told them what we were going to do.

Here's Trump, in 2003, explaining his own personal doctrine, while being fluffed by Neal Cavuto:

If you had to sort of breakdown for the president, if you were advising him, how much time do you commit [in the State of the Union] to Iraq versus how much time you commit to the economy, what would you say?

Trump: Well, I’m starting to think that people are much more focused now on the economy. They are getting a little bit tired of hearing, we’re going in, we’re not going in, the — you know, whatever happened to the days of the Douglas MacArthur. He would go and attack. He wouldn’t talk. We have to — you know, it’s sort like either do it or don’t do it. When I watch Dan Rather explaining how we are going to be attacking, where we’re going to attack, what routes we’re taking, what kind of planes we’re using, how to stop them, how to stop us, it is a little bit disconcerting. I’ve never seen this, where newscasters are telling you how — telling the enemy how we’re going about it, we have just found out this and that. It is ridiculous.

Cavuto: Well, the problem right there.

Trump: Either you attack or you don’t attack.

Cavuto: The problem there, Donald, is you’re watching Dan Rather. Maybe you should just be watching Fox.

Trump: Well, no, I watch Dan Rather, but not necessarily fondly. But I happened to see it the other night. And I must tell you it was rather amazing as they were explaining the different — I don’t know if it is fact or if it is fiction, but the concept of a newscaster talking about the routes is — just seems ridiculous. So the point is either you do it or you don’t do it, or you — but I just — or if you don’t do it, just don’t talk about it. When you do it, you start talking about it.

This is a theme he repeated on the campaign trail. Don't tell the enemy what you're going to do, is the gist of what he said, over and over. And yet, here we are, and I think people have a pretty good idea why an aircraft carrier strike force is headed to Korea.