Carter Page is a Traitor to This Country 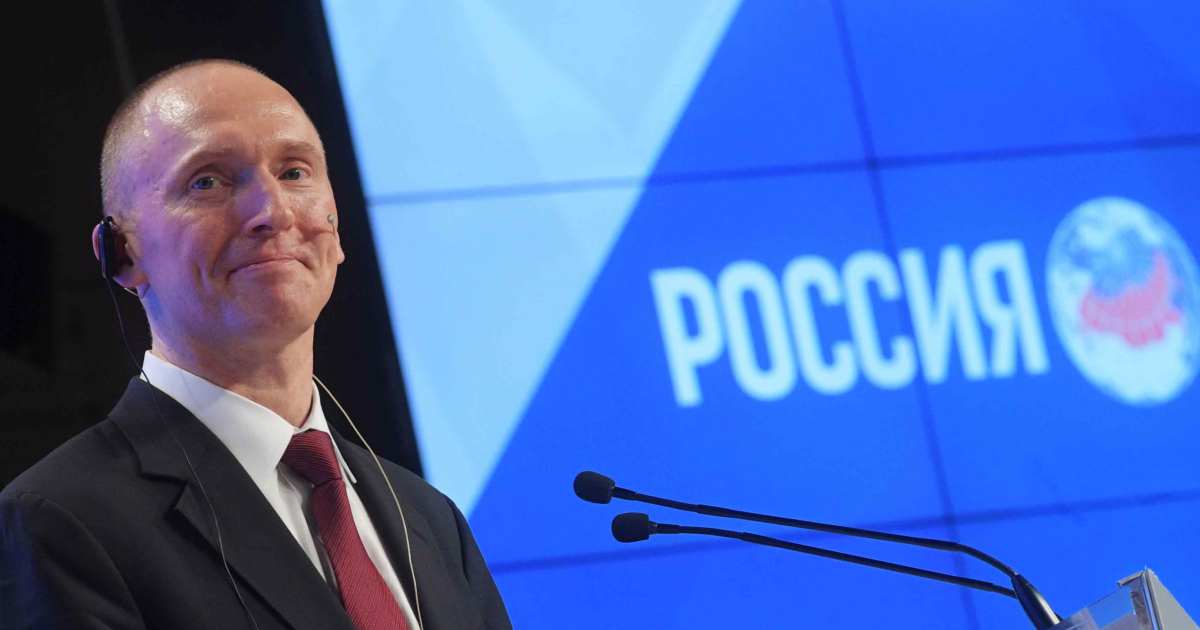 Carter Page seems like a guy who would be happier living in Russia:

Two years before joining the Trump campaign as a foreign policy adviser, New York business consultant Carter Page was targeted for recruitment as an intelligence source by Russian spies promising favors for business opportunities in Russia, according to a sealed FBI complaint.

Page confirmed to ABC News that he is the individual identified as "Male-1" in a 2015 court document submitted in a case involving the Russian spies.

Page told ABC News he cooperated in the case, and felt the Feds "unmasked" him by describing him in January 2015 in a manner that would be known to energy insiders.

"I didn't want to be a spy," he said in an interview early Monday afternoon. "I'm not a spy."

According to the document, the FBI interviewed Page as part of the investigation stemming from the indictment of three Russian men identified as agents of the Russian overseas intelligence agency, the SVR. One of them, Evgeny Buryakov, was operating undercover as an executive in the New York office of a Russian development bank. The Buryakov case resurfaced in headlines last week when President Trump’s son-in-law Jared Kushner revealed he had met with the head of the same bank. Buryakov was sentenced to 30 months in prison as part of a plea agreement, but he was released from prison over the weekend and is awaiting deportation to Russia.

Let's parse this one statement for a moment. "I didn't want to be a spy."

OK, fair enough. You had contact with Russians, the FBI told you they were spies, and what do you do?

Carter Page, the former foreign policy adviser to Donald Trump, currently under investigation by the FBI on suspicion of illegal communication with Putin officals, came back to Russia’s capital to give a talk.

On Monday, Mr. Page gave a lecture at the state run Rossiya Segodnya news agency titled ‘Departing from hypocrisy: potential strategies in the era of global economic stagnation, security threats and fake news.’ In this lecture Page blamed America for “arrogant foreign policies” towards Russia, talked about “restoration” of the U.S.-Russia relationship under Donald Trump, and expressed his excitement for Exxonmobile CEO Rex Tillerson as Secretary of State.

“One of the big news issues and something people are keeping an eye for, and something that will be very important as we watch the new administration develop, who will be our new secretary of state.”

Even though Donald Trump had not yet announced his pick to America, Page presented a slide during his presentation in Moscow, in which Rex Tillerson was compared next to Hillary Clinton under the headline ” First Secretaries of State for New U.S. Presidents”.

That's right. After being told by the United States Government that he gave some Russian spies, willingly, I might add, some information about America's power industry, Carter Page got on his horse and went to Russia. This is after being told, to his face, that he was successfully recruited by known Russian spies working in this country.

How stupid do you have to be to go to Russia and talk to Russians after they have recruited you to be a spy? A new kind of stupid. Carter Page stupid. And, on top of that, you hitch your wagon to Donald Trump, knowing full well you've been compromised as a person.

Honestly, there's a fine line between clever and stupid and it's hard to figure out why these people around Trump are not already in prison. But, go on. Tell me about her E-mails and all that again. I like that story. It puts me to bed at night, it's so good.