Trump Throws Bannon and Priebus Off Air Force One 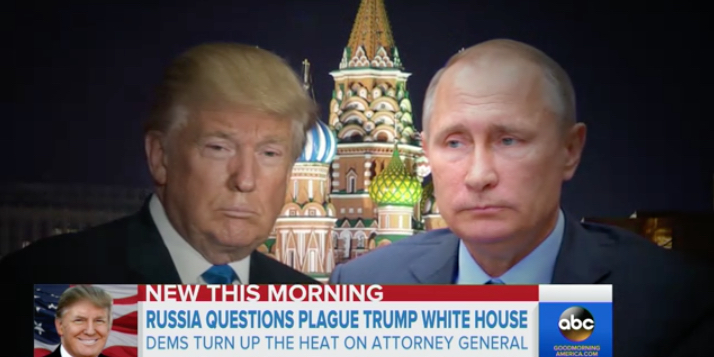 Everything we know so far about Trump, his campaign, and Russia has pretty much all been confirmed. Trump himself confirmed that the Federal Government has gone to a FISA court and has been conducting counterintelligence surveillance of Trump's people. Russia has killed six of its senior officials in recent weeks--four of them were named in the Christopher Steele dossier.

This is how it looks when a scheme begins to unravel:

Before heading off to his so-called "winter White House" in Palm Beach, Florida, on Friday, President Donald Trump summoned some of his senior staff to the Oval Office and went "ballistic," senior White House sources told ABC News.

The president erupted with anger over the latest slew of news reports connecting Russia with the new administration -- specifically the abrupt decision by Attorney General Jeff Sessions to recuse himself from investigations into Russian meddling in the 2016 campaign.

Sources said the president felt Sessions' recusal was unnecessary and only served to embolden Trump's political opponents. The attorney general made his announcement Thursday just as Trump returned to Washington from a trip to the U.S.S. Gerald Ford in Virginia for a speech about his agenda as president.

Hours earlier, aboard the ship, the president had told reporters that he had "total" confidence in Sessions and saw no reason why the attorney general should recuse himself.

“We should have had a good week. We should have had a good weekend. But once again, back to Russia," a senior White House official said, expressing the frustration simmering in the West Wing following the news earlier in the week that Sessions failed to disclose during his confirmation process that he had met with the Russian ambassador twice during the election campaign. Sessions at the time was a senator on the Armed Services Committee and was also helping the Trump campaign.

Never mind that Trump has spent about 30% of his entire presidency at Mar-a-Lago. He was so furious he told Steve Bannon and Reince Priebus not to come with him. No, the real story is that the shit has hit the fan.

As President Trump was in the air aboard Marine One headed for Air Force One on the tarmac at Joint Base Andrews, a last-minute phone call was made from the West Wing to the team on board the president’s plane with a directive to remove Priebus and Bannon from the manifest, sources said. They would not be coming to the Sunshine State.

What happens if there's another crisis? Trump doesn't have his chief of staff with him. That makes this weekend a full-blown vacation. Nice work if you can get the Russians to steal it for you.

UPDATE: Bannon actually made the trip, separately, and he's at what amounts to be "Camp Mar-a-Lago." Priebus is still in Washington D.C., which is an unusual place for a chief of staff to the president. Does this mean Priebus is "out of the loop?"