The Right Wing Will Attack Substance Every Time 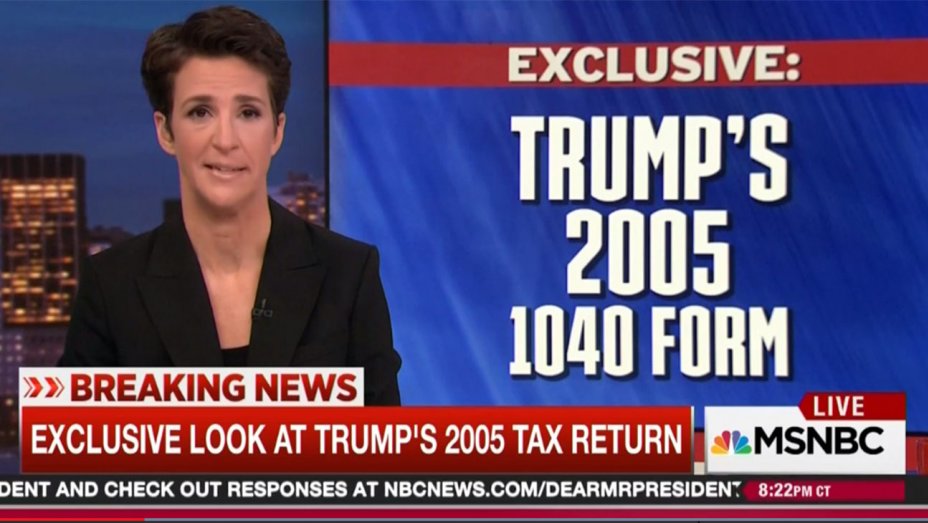 This kind of thing demonstrates one of the methods that right wingers will deploy against journalism because, well, journalism is what is kicking their asses right now:

"It takes less time to fill out your taxes than for Rachael Maddow to get to what's in Trump's taxes."

Rachel Maddow teased a big reveal on her Tuesday night show, tweeting earlier in the afternoon that she had gained access to President Donald Trump's tax returns.

The MSNBC host promised to release the returns on her show at 9 p.m. ET.

"BREAKING: We've got Trump tax returns," Maddow wrote, with the network even displaying a "Trump Taxes Countdown Clock" prior to the airing of her show.

The news got Twitter users abuzz about what she was planning to reveal.

However, as Maddow started off her show talking about Trump's reasons for not releasing his taxes, and questioning "cageyness" around Michael Flynn and his ties to Turkey, along with Trump's questionable real estate deals, among many others topics, viewers began to get restless.

Anybody with their underwear in a bundle over this can go pound sand. If you can't spell her name, you're not a regular viewer and you're probably looking to make hay out of nothing. The Rachel Maddow Show operates in a specific format designed to keep people watching because she is competing for ratings in a tough television landscape. She has to tease segments and use each one of them to the best possible advantage in order to stay on the air and keep MSNBC from cancelling her show. You may not like the tease, but she's hardly the only one who has to fill an hour every night who does that. If you watch her on a regular basis, hey, that's how she works and there's nothing wrong with it.

Thank God her ratings are up because no one wants to end up like Ed Schultz, right? No one wants to end up on the wrong side of a discussion about what's best for her hour of programming. She's up against relentless lies and incompetence from her competitors and she's doing amazing work, night in and night out. She's also fending off Brian Williams and anyone else who covets her time slot.

But note the attack on the substance of her reporting. Trump made $150 million dollars and used a bunch of write-offs to pay as little tax as possible. Good for him. He's never been interested in doing anything to support the U.S. government or the State of New York. He's in business to take as much money from suckers and keep it, and we've known about this for as long as anyone has heard of Donald Trump. The easy marks never see him coming, do they?

One thing you can't call Trump is a patriot. He plays everything like a casino game (and, boy, when the house always wins, you can count on Trump to lose bigly when the odds are in his favor when it comes to legalized gambling). He's a bumbling fool who only made $150 million in calendar year 2005. That, in and of itself, should reveal the real con here. He's not a billionaire and he grossly overinflated his wealth and business acumen to trick people into voting for him.

When Rachel Maddow uses substantive journalism to reveal this, of course the wingers are going to attack the form not the substance. That's what they do because that's all they have left. They have no answers, no ability to govern, and no desire to work through problems. They are in smash mode and everything looks like fine glassware.