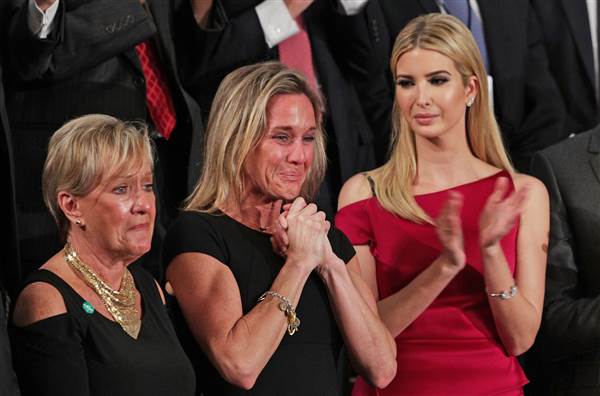 It was a brilliant marketing move.

Put Ivanka Trump next to the widow of a fallen SEAL, and then milk it for all it's worth.

It was shameful, but it took a page out of the George W. Bush playbook. It was reminiscent of all those times a flailing Bush Administration used the military as a backdrop as it tried to change the narrative about the Iraq War. In the weeks ahead, Trump will be forced to use to military in this way because the number of Americans who support him is disappearing as fast as the ice in the Arctic.

Our worthless media buried the lede once again. These are the LAST three paragraphs, but they should have been the first:

Trump's address came less than 40 days into a presidency that has so-far been defined more by controversies than legislative action.

He has yet to sign any substantial bills into law, and actions taken on his biggest campaign promises have largely stalled. A hastily introduced executive action restricting travel from seven Muslim-majority countries was blocked by a federal court, tensions continue to grow between the U.S. and Mexico over a proposed wall on the southern border, and Republican lawmakers have been lambasted at town halls over promises to repeal and replace the Affordable Care Act.

It's led to Trump, one of the most unpopular presidential candidates ever to take the oath of office, holding a record low job approval rating for a newly inaugurated commander-in-chief. Just 44 percent of Americans say they approve of how Trump has handled his new job, while 48 percent say they disapprove.

One of? No, he is the most unpopular. No mandate, no legitimacy, no right to call himself a loyal American, wholly owned by Russian oligarchs, and no hope of climbing out of the hole. All we can hope for is survival and special elections.