Sean Spicer is a Lying Jackass 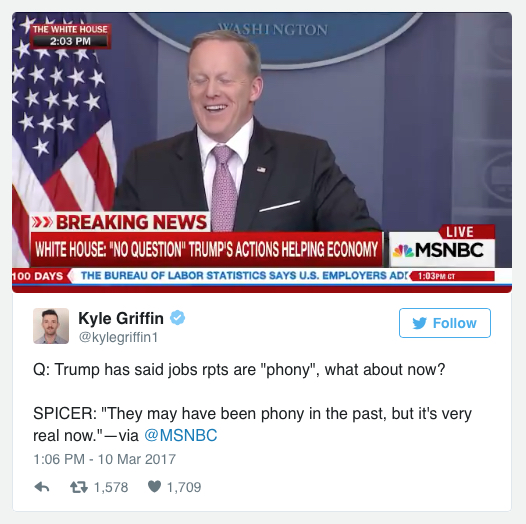 Let's be clear about one thing--when the "numbers" are good, and reflect favorably on the Trump Regime, they're "real."

Whenever anything reveals what a incompetent bunch of jackasses they are, the numbers are "fake."

We're still living under President Obama's budget and we're still living in his economy. Once the Republicans pass another budget, then we're going to be living in the vast dystopian hellscape that will belong to Trump. So, fuck this bullshit. The fact that we added jobs in February has as much to do with President Trump as they do with the first President Bush.

Sean Spicer has no credibility so why do these reporters even show up for work? If White House Correspondent was my job, I'd find a Chipotle that would take me and I'd learn as much as I could about preparing food for healthy consumption because, at least then, I'd have some fucking dignity in this life. Jeebus.