Nobody Will Be Worse Off Financially 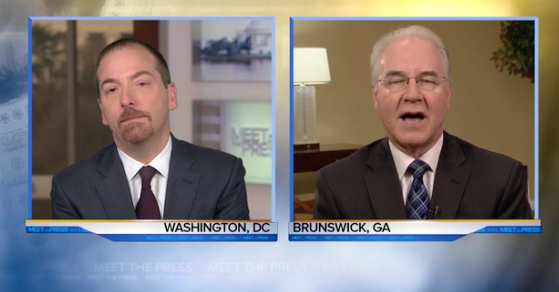 The only consistent thing about Trump's Regime is that it will never run out of lies to tell the American people:

No one will be adversely affected by the Republicans' new health care bill once its enacted, according to Health and Human Services Secretary Tom Price.

"I firmly believe that nobody will be worse off financially in the process that we're going through," Price insisted when pressed by NBC's Chuck Todd during Sunday's "Meet The Press." "They'll have choices that they can select the kind of coverage that they want for themselves and for their family, not the government forces them to buy."

"There's cost that needs to come down, and we believe we're going to be able to do that through this system," he added. "There's coverage that's going to go up."

These are words that will haunt no one because this is a government run by people who know they're going to be thrown out of office in four years. They know they're simply reversing tax increases put in place by the Affordable Care Act and they believe that they can simply tell the American people that anyone without health insurance is making a "choice" not to have coverage.

I want the Democratic Party to really start framing these issues for the voters. I want them, to hang every word uttered by these people up on billboards so everyone can see the choice they made in November. If you have an uneducated, untethered voting public that cannot get informed comment from the media, you end up where we are today. The cost of saying "fuck it" and voting for the worst candidate is going to be steep.