Mike Kelly Runs From His Own Rhetoric 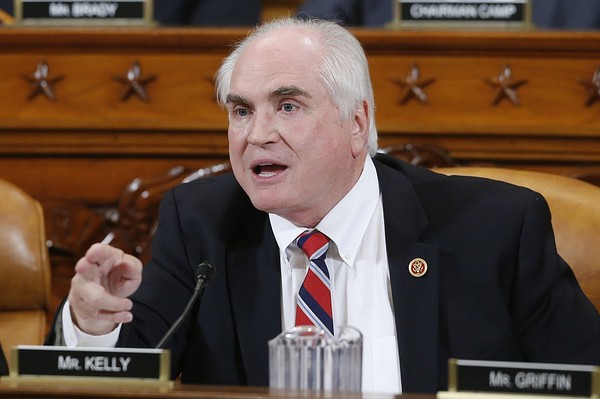 There are two questions here. Why would Congressman Mike Kelly say something crazy in public in order to whip up support for whatever it is he wants to do? He said recently that the only reason why President Barack Obama and his family are living in Washington D.C. is so that they can run a "shadow" government and undermine the Trump Regime. He knows he's going to take flack for such a statement because it's crazy. So why would he do it?

The second question is, why would he say it and then back away from it? Why do that since it's what most Republicans probably believe no matter what. It fits into their pattern of crazy--advance outlandish idea rooted in something made up on the spot but could only be true if their insane worldview was somehow plausible.

Is it because Kelly failed to use the buzzword "deep state" and said "shadow government" instead? Who knows?

Anyway, here's Kelly running from what would seem to be a "reasonable" Republican position of martyrdom, doom, and hair-pulling nuttery:

A Republican congressman on Friday backed off his claim that former President Barack Obama stayed in Washington solely to run a "shadow government" to undermine the GOP agenda.

The office of Pennsylvania Rep. Mike Kelly said the congressman "does not believe that President Obama is personally operating a shadow government."

Kelly made the initial accusation at a Republican dinner Saturday north of Pittsburgh. It was captured in a video posted to YouTube.

The Obamas have said they would remain in the nation's capital until their youngest daughter, Sasha, completes high school.

In the video, Kelly is heard telling his audience that Obama remained in Washington for "one purpose only ... to run the shadow government that is going to totally upset the new agenda."

Kelly's office initially released a statement saying that the congressman was "sharing the frustration of everyone in the room over how they believe certain Obama administration holdovers" are trying to upset President Donald Trump's agenda.

Selling gibberish to shut-ins is practically in the job description for members of Congress, and here you see one of them backing away from what would be a normal human interaction with current events for 98% of the Republican Party. Did Jesus appear, compelling him to knock off the bullshit? Does he have polling numbers that suggest that saying crazy things in public will hurt his chances for re-election? Did some measure of decency kick in?

There's no way of knowing with these people. Running your mouth about things that make no sense has certainly not harmed anyone in public life up to this point.