Give Us a Special Prosecutor Already 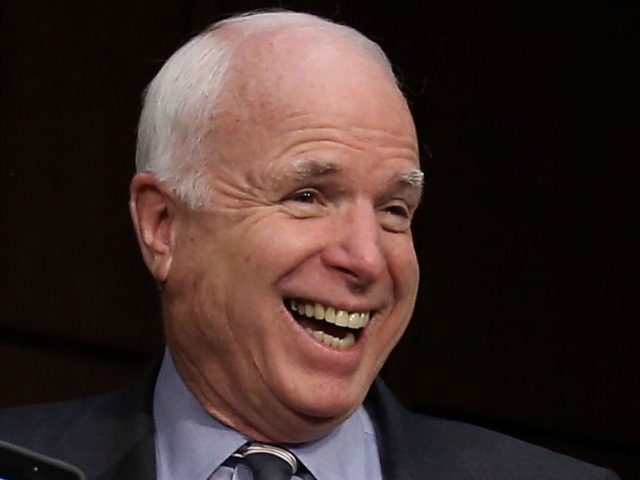 If you're too "bizarre" for John McCain, you've got to go (except for Congressman Schiff, of course):

In an interview with MSNBC's Greta Van Susteren on Wednesday, Senator John McCain blasted the behavior of the top Democrat and Republican on the House Intelligence Committee, calling their actions "bizarre." "No longer does the Congress have credibility to handle this alone, and I don't say that lightly," he said in the interview. McCain went on to say that there should be a congressional select committee or independent commission to investigate the matter further. Earlier on Wednesday, Devin Nunes, the Republican Chairman of the House Intelligence Committee, said that there was new evidence indicating that U.S. intelligence may have incidentally collected communications of President Donald Trump's transition officials. Later top Democrat Adam Schiff took him to task for briefing Trump on the matter.

Devin Nunes basically tried to loop the Trump Regime in on what's happening and give them some cover in the weeks ahead. Adam Schiff is correct--you don't brief the guy being investigated and give him a head's up and a helping hand and an early Christmas gift while you're in the process of determining how bad he betrayed his country. Schiff hasn't done anything wrong because he hasn't lost his temper in front of these assholes yet. If there was any sanity in the House of Representatives, Nunes would be sitting with Darrell Issa right now.

Are we ever going to get to the bottom of this? Nope--not for another two years. The Republicans don't want that to happen. So, what we have to do is organize and prepare for 2018. If the Democrats can win back the House and Senate, we can investigate, we can level charges, and we can impeach this president and remove him and his cronies from office. None of that will happen with John McCain's help, but thanks for playing, Senator.

Oh, and if this had been a court of law, Nunes would be guilty of about fifteen or twenty of those lawyerly things that they talk about on television.