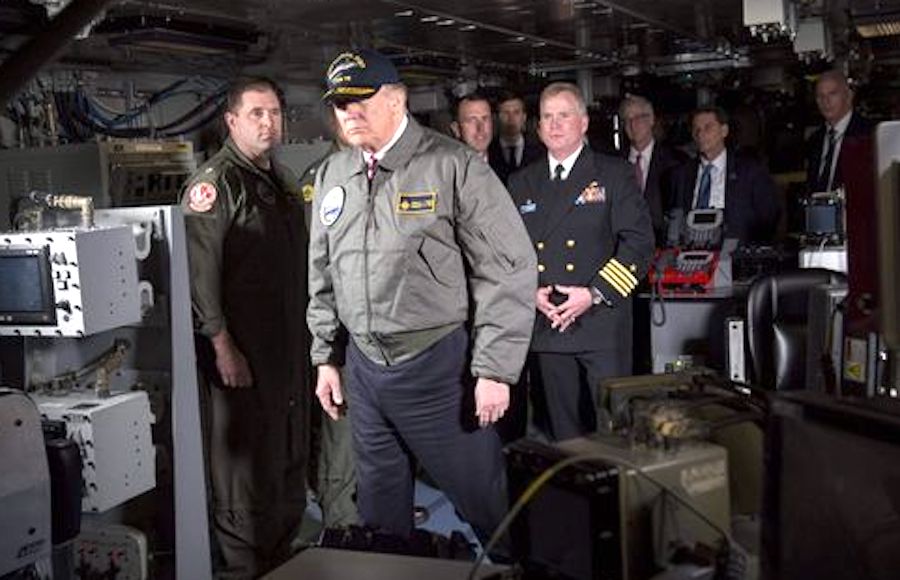 There are so many things that are wrong with this photo that I just have to write awful things on purpose.

Aside from the fact that the President of the United States looks fat, and I really don't know why this isn't the lead on every broadcast every night, can you tell that he's lost?

He has no idea where he is or what any of this stuff does. He's used to opulence and wealth, clean, open spaces and comfortable chairs and couches but here he's surrounded by military equipment. He has never been around these things and has no idea what they are or what they do. Everything is at knee level. It's chaos in here! And where are the gold toilets?

How did Trump get through the doors? I have no idea.

The media won't talk about how big Trump's ass is. They won't talk about his rolling gut and his oversized head. They don't even wonder about his health anymore. Did one solid week ever go by last year when someone wasn't commenting on Hillary Clinton's personal appearance? Her hair, her wardrobe, or her health? Why doesn't anyone notice that Trump is a big sack of flubbery goo?

Many people know this already, but I'll bring it up anyway out of sheer cruelty. Among the wealthy, being fat is a venal sin. You can be ugly, and you can even be Aristotle Onassis ugly, but you must look reasonable with your shirt off. It's a Mediterranean thing--being bare chested and not looking like an oaf is perfectly fine if you have a pan face or a nose fit for a broken Roman statue. At least wear a girdle, man. Hide that spare tire. This is why so many people of means use body shaping technology to the fullest extent. That Trump is either too foolish or too much of a health risk to use fat-removal techniques says something. Of course, a delusional, vain man who thinks he is not fat wouldn't dream of have the yellow stuff sucked out of his love handles.

Someone stuck that hat on his head and now Trump can't take it off. As soon as they remove a hat from his head, they have to re-do his weird hair. So, you have all of these military officers and Secret Service guys and none of them are wearing a cover. They all have a certain look on their face--who let this fat guy in here? A sharp aide needs to be put in charge of making sure that when they put a hat on the president's head it actually fits so that he can wear it correctly. He's wearing his hat like he's about to tee off into the noonday sun.

And that's the LARGEST jacket they have, guarantee it. Whoever sized that jacket had to find one that was meant for only the fattest sailors still in the Navy. Plenty of people are fat, myself included, so this is not a knock against people who are overweight. But Trump is a fat guy who doesn't believe he's fat--you're just looking at him wrong! It's your fault he looks fat! It's your fault that his clothes don't fit and that he eats too many candy bars. Stop looking at him that way!

Those poor sailors. They shined and cleaned every inch of the Gerald R. Ford on short notice and they ended up giving a dog-and-pony show tour for a guy who is too tubby to fit into a regular-sized flight jacket.