Don't Be Surprised if Trump Starts a War Somewhere 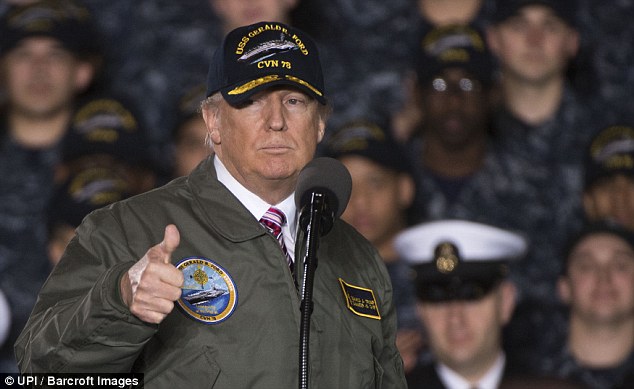 One of the things that came to mind tonight while watching Chris Hayes, Rachel Maddow, and Lawrence O'Donnell was the fact that no one seems to have picked up on what presidents in crisis sometimes do.

If you're Reagan, you invade Grenada.

If you're Clinton, you bomb Iraq.

If you're second President Bush, post-9/11, you invade Iraq and overstay your welcome.

If you're Trump, you invade [blank space].

Well, if you're Trump, you invade Russia, right? Or Iraq a third time. Or you invade Ecuador and take the oil they don't have. More likely, you send an incompetent boob occupying what used to be the Secretary of State's office and you start a war with North Korea.

This is a president in crisis, and one of the things he and his advisors may decide to do is start a war under a phony pretext and use it to temporarily distract people from the fact that the sharpest people in the FBI--the counter-espionage agents--are actively engaged in looking into whether or not the Trump campaign coordinated efforts with Russia in order to steal the 2016 election.

It would take a lot for Dan Rather to say something like this, and this is what he said an hour ago:

[...] with each turn of this story, the level of seriousness deepens. Add to this some unorthodox actions by the Republican head of the House Intelligence Committee, Devin Nunes, briefing President Trump on details of investigations, and we are long past having any excuse not to launch an open bipartisan investigation and a special prosecutor.

I have seen a lot in my lifetime. But I have never seen anything like this. No one has. The cauldron of chaos and confusion which engulfs President Trump in his early days in office is simply unprecedented.

Who knows what tomorrow will bring? The vote on the health care bill is shaping up to be its own mess. Can President Trump arm twist his own party members to deliver victory in the House? What last minute concessions will have to be made to bring along conservatives? Should we really be rushing a bill on heath care with major changes hammered out for politics instead of policy? What will this mean for the Senate?

The White House is under siege. The President's poll numbers drop to record lows. The fires of scandal are encroaching. Around and around it goes, where it stops nobody knows. Dangerous times.

But what I'm telling you is, don't be shocked when it looks like this country is headed into armed conflict with another nation/state that would otherwise be considered marginal and insignificant. To "wag the dog" is to pick a dog that can't bite anymore, and that means that innocent people are going to die because Trump is surrounded by the very worst people who have ever served in a White House.

Crisis mode is upon us, and that's one of the cards that hasn't been played in a while.