Devin Nunes is the Patsy 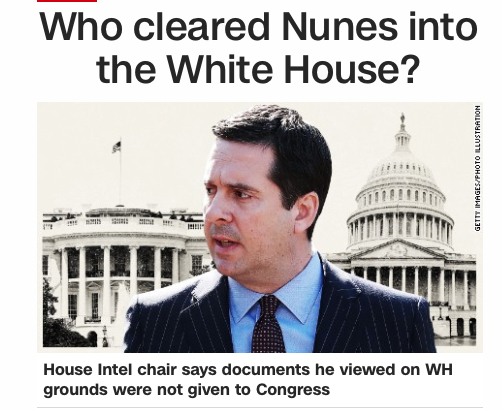 Poor Devin Nunes. The Trump Regime just turned him into their patsy:

Nunes said he was there for additional meetings "to confirm what I already knew" but said he wouldn't comment further so as to not "compromise sources and methods." A spokesman for Nunes said he "met with his source at the White House grounds in order to have proximity to a secure location where he could view the information provided by the source."

A government official said Nunes was seen Tuesday night at the National Security Council offices of the Eisenhower building which, other than the White House Situation Room, is the main area on the complex to view classified information in a secure room.

Nunes told CNN he had been working on nailing down the surveillance information before Trump's unsubstantiated claim earlier this month that he was wiretapped by President Barack Obama. Last week, Nunes told CNN he was unaware of any evidence to back up Trump's claim.

He told CNN Monday he wanted to "reiterate this has nothing to do with Russia." In a statement, Nunes' spokesman, Jack Langer, said the congressman is "extremely concerned by the possible improper unmasking of names of US citizens."

Two congressional sources said Nunes was with a staff member Tuesday night when he got a message, got out of the car and got into an Uber. Staff did not hear again from him that night.

They next heard from Nunes Wednesday morning, the day he scheduled a news conference before going to the White House. The staff do not know where he went Tuesday night.

This is a brilliant piece of strategy. Compromising the man in charge of the House's inquiry into what happened when Vladimir Putin decided to get behind Trump and ride him into oblivion is what really, really skilled ratfuckers would do if a ratfucker could fuck rats. In this case, the Trump people--the rats--have now elevated a sitting Congressman who was friendly to their cause into the catbird seat.

BLUF: Either Nunes, et al, broke laws+regs re SCIF access, or NSC (ie the Trump WH) is fully complicit in this messhttps://t.co/wzGflUKa8r

They have derailed the investigation. Full stop. The Republicans can't go forward with Nunes so, guess what? They're not going anywhere.

But Devin Nunes is in so much legal jeopardy right now, you'd think he had no training in the law.

And that's exactly the point--they went after Nunes because he's a dumbfuck from Central California who wouldn't know the law if it bit him in the ass. Congress is full of trained lawyers, and, somehow, someone found a way to draw Devin Nunes into the midst of a nest full of vipers. This is not an accident. Someone groomed Nunes for his moment in the sun. He must be the pride of the College of the Sequoias. Had he gone to the worst law school in California, he would never have gotten into that Uber. If this guy gets off with anything less than obstruction of justice, it'll be a miracle because he's up to his armpits in the same stew as all the rest of Trump's minions.

If the FBI hasn't already started tearing Nunes into pieces, then how are we still a functioning democracy?