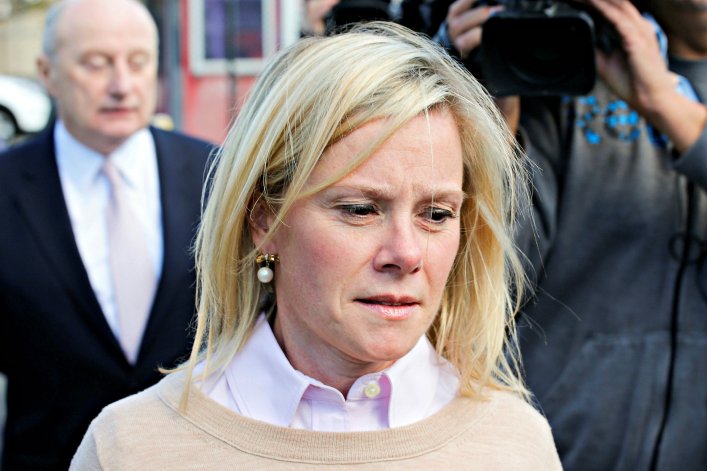 Two top ex-allies of New Jersey Gov. Chris Christie were sentenced Wednesday to prison sentences for their roles in orchestrating retaliatory lane closures on the George Washington Bridge. Bridget Anne Kelly—the former Christie deputy chief of staff who infamously authored the email saying “Time for some traffic problems in Fort Lee”—was sentenced to 18 months plus one year of probation. Bill Baroni, her conspirator as the former deputy executive director at the Port Authority of New York and New Jersey, was sentenced to two years behind bars plus 500 hours of community service. “I regret more than anything that I allowed myself to get caught up in this,” Baroni said to a federal judge before his sentencing. “I failed.”

A man would have walked into the courtroom and said, "your honor, as a former U.S. Attorney, I cannot allow this to happen. Miss Kelly is not responsible for what happened. I am, let's go in the back and cut a deal." That man would have been a flaming jackass, of course, because that's not how the legal system works, but you get the idea. Instead, he takes his gargantuan jowls and his overfed ass to Washington D.C. where he can sit next to America's most popular president named Trump (and hopefully the last one, too).

What do you have to do to prove to Trump that you're cabinet material? You gotta let two little people go to prison so you can escape accountability.

Bridget Anne Kelly made a mistake. She should never have gotten involved in the whole Fort Lee traffic issue. She should not have worked for Chris Christie, period. And she is not innocent, not a saint, and certainly not someone who should have been working for the State of New Jersey.

Let it always hang over his fat fucking face--Chris Christie is just the kind of tough guy who lets a woman with four children go to prison in order to save the tattered, shit-stained remnants of whatever he calls a political future. How low can you be? You can be as low as Chris Christie and still get paid to be the governor of a state that is eager to be rid of him.

Bridget Anne Kelly, former deputy chief of staff to New Jersey governor Chris Christie, took the stand in the Bridgegate trial Friday and dropped a few bombshells. Kelly, who sent the infamous “time for some traffic problems in Fort Lee” email, testified that she told Christie about the “traffic study” plan in August 2013, a month before the George Washington Bridge lane closures.

Kelly, who’s charged in the Bridgegate case, testified that she had discussed a traffic study with David Wildstein, a former Port Authority official who confessed to being the mastermind of the plot in August 2013. Kelly said Wildstein had emailed her, asking to discuss an issue that was “extraordinarily weird even by my standards.” The two spoke on the phone, and Wildstein told her Fort Lee’s access lanes to the GWB were tying up traffic on the bridge, and Wildstein wanted to do a traffic study on what would happen if Fort Lee no longer had that privileged route. Kelly said Wildstein told her it would cause major traffic problems, but the plan would boost the governor ahead of his reelection campaign — Christie would be able to take credit for easing traffic on the George Washington Bridge, reports the New York Times. Kelly alleges that Wildstein asked her to run the plan by Christie.

Kelly went to Christie with Wildstein’s plan, and the governor allegedly told her it was fine.