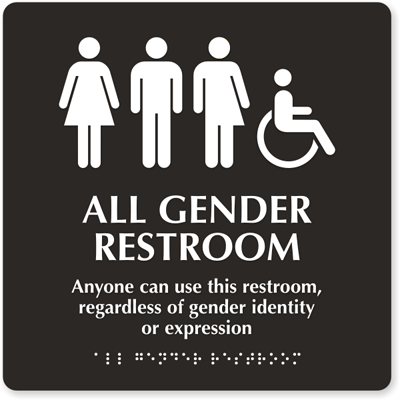 The Trump Regime wanted to find someone to hate so they have now moved on to transgender students trying to get through school.

Anyone who has ever gone through K-12 education in America knows it is a breeze if you are straight, white, and wealthy. If you are anything else, forget about getting through it without days and days of pain and suffering for kids trying to find a place in this world. If you're a transgender student, you might as well expect that your life is going to be difficult and challenging. And while we can attack the problems of bullying and stereotyping and discriminating, it's enormously difficult to change what is in the hearts of people who want to express hate and intolerance towards people who are the same as all of us but different.

The Trump Regime decided to strip away rights today. They went after dignity. They went right to intolerance and hate:

The Trump administration issued a new letter on Wednesday: The federal government will no longer stand behind Obama-era guidelines requiring schools to accommodate transgender students based on their gender identity. The new administration is withdrawing two letters, written in 2015 and 2016, in order to “further and more completely consider the legal issues involved.” The Departments of Justice and Education believe “there must be due regard for the primary role of the States and local school districts in establishing educational policy,” it said.

This decision to reverse course on transgender rights could have consequences for a number of pending court cases. But most importantly, the letter suggests that the federal government will step back from this fight altogether, leaving it to the states to decide.

Taking away the full weight and force of the Federal government behind providing for transgender people is a cheap stunt to appease the hateful base of the Republican Party. It is a cowardly move designed to check another box that this so-called "president" can recite for adoring crowds. It does not help a single American. It does not put anyone back to work. It does not fix a single thing in this country that needs fixing. It does not make us a better people. It does not give us the ability to be proud of working through our differences and our concerns. It does not provide anything useful for Americans anywhere. It does not give freedom to those who have been oppressed. It rewards small people for their small hearts and their small ideas.

Certain states will do the right thing. Many more will do the wrong thing and force Americans to confront what it is that they don't understand. A moment of human dignity--the ability to use the fucking bathroom--is all that was granted when the Obama Administration granted those rights decades and decades too late for an enlightened people. It forced some schools to rearrange the fucking signs on some fucking bathrooms and accommodate people. So what?

This is not what America is about. You don't take away rights. You look for ways to give people as many rights as you can and you look for a way to correct injustices wherever they are. The American people should have one unassailable principle--we will always try to do better. This does worse. This does evil. This is the work of monsters who are doing the bidding of small, small people.