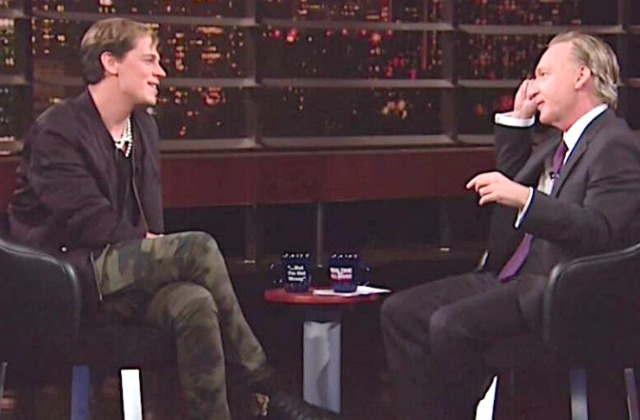 If you thought they were never going to get around to handing Milo Yianoppoulos the same anvil they handed to all of the other prominent "alt right" fanatics, you would not be alone. As we watch this demented little sleaze sink beneath the waves, screaming for one last moment of shrill, ill-conceived glory, let's turn our attention to the man who normalized him this past week.

I am not a Bill Maher fan, and that goes back decades. His presence on the media landscape is baffling--he has nutty, anti-science ideas and more contempt for the left than he has for the right. He criticizes the right people at the right time--say, when they're down or going down or about to go down, and follows conventional wisdom like a dog follows a bone. But he's not an original thinker.

Is he a George Carlin? Is he a Chris Rock? Is he even a Gallagher? No, he's not even that guy with the puppets that your grandma loves to go see when she makes it to Branson.

But who is, anyway? Well, you'd think a guy who's had his own show this long would be capable of being entertaining enough to justify watching, but he just isn't worth the effort. He has some great writers, but that's about all you can say. He curses at the right times and steps on other peoples' jokes and can't stand being out of the picture so he makes sure they put guests on either side of him. Hey, if you're into that, I have no complaint with your choices.

This past week, Bill Maher normalized a known purveyor of the worst kind of racist hate imaginable. He normalized this twisted, mentally sick young man for the sole purpose of being able to punch a few hippies. Somewhere, someone said, "you know Bill, you've really been sticking it to the Republicans and Trump lately (they're not the same) and it's probably time to punch a few hippies."

Someone is going to deep-six that footage, and quick. The last time anyone got that comfy with a pedophile apologist like that, we ended up with a new Pope. Hi-yo!

So they put Milo on his show. Maher sat down with him and made common cause with Yianoppoulos about how fun it is to piss people off with the worst kind of race baiting and the most offensive kind of anti-transgender dialogue you could imagine on television, cable or otherwise. They were operating under the assumption that only liberals go crazy when someone uses hate speech to attack others, and that's wrong. Everyone knows there's at least one or two Republicans out there who would rather you not call for the heads of their wait staff. There's no reason why the marketplace has to reward anyone for spreading hate.

Liberals don't want to censor Yianoppoulos. They want to protect the rights of the people he urges his rabid followers to attack. How fucking simple is that?