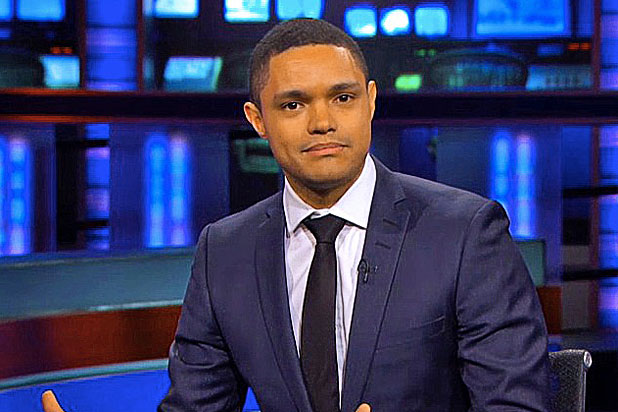 I didn't find what Meryl Streep said last night to be tone deaf because she was not punching down at a helpless individual:

“I understand what Meryl Streep was trying to do, and I don't know if I could have done better, but here’s the thing I feel like we could all learn as people,” Noah said. “You don’t have to make your point by shitting on someone else’s thing, because a lot of people love football and the arts.” He noted that he spent his Sunday watching football and then the Golden Globes.

To make his point, Noah joked that the NFL Commissioner “acts” like he cares about concussions. He went on to undercut himself by saying that to focus on that part of the speech “undermines” her “larger point” about “respect” and “empathy.” But the bulk of his commentary centered on a lack of inclusiveness by Streep — not Trump.

Streep explained something rather eloquently and it was immediately misconstrued by the writers who fed Noah this crap. The "arts" are not exclusive in this country. The diversity celebrated on Sunday night was way, way better than the Oscars and that's what Noah does not understand. Football and Mixed Martial Arts are sports, and a huge majority of Americans have rejected these endeavors outright. ESPN is losing money every time someone opts out of the "sports" package when they sign up for cable television. The NFL's ratings are dropping like a stone and watching people beat the hell out of one another isn't exactly art. These are multi-billion and multi-million dollar industries and nothing Streep said is going to harm them in any way, shape or form. In this, she was punching upwards and not down.

Her larger point, though, was also an example of punching upwards, namely, at the president elect of the United States and his undeniable immaturity, indecency, and his vitriolic and unstable nature. She was speaking on behalf of people who aren't going to be given a chance to stand in front of tens of millions of people and receive a prestigious award. She used the time when she could have been celebrating herself to punch upwards at a man so venal and so vile that she received accolades and applause. She was not "tone deaf" to anyone's suffering because she stood up for those who have suffered indignities inflicted upon them by a powerful white male. She took a dig at people who prefer sports. Guess what? They'll survive the indignity.

I didn't catch where she was indifferent to human suffering or contemptuous of the weak. Hence, she was not tone deaf.

So, here you have a misguided piece of commentary that calls one of the most accomplished and successful actors (she's not an actress, she is, in fact, and actor) of the last hundred years tone deaf while not understanding that her tone was unmistakable and it took several hard punches upwards to puncture the fragile ego of a deranged tweeting man. She spoke for people who couldn't and, even with her failing voice, managed to speak truth to power. No one weak or powerless was injured at the end of her speech. Only one howling, spitting, splenetic individual was found to be injured, and he returned fire by punching text on an Android phone while surrounded by security guards and crass opulence.

If Streep was so tone deaf, why do so many decent people who voted against racism and intolerance agree with her?

Trevor Noah does not understand American culture and I just don't have any time for his nonsense. What the hell happened to the Daily Show? There's no one left over there who can write or think anymore? It should be easy to put words in front of Noah that he can read--words that don't embarrass him and make him look like he's just some weird guy goofing through something that might make a twelve year-old snort. It should be easy to find a few writers who can fix this terrible mess of a show that has lost every scrap of credibility and relevance in less than a year.

We just had an election. The Daily Show was not a factor in the discussion, was it?

Craig Fucking Kilborn could read a teleprompter. And Trevor Noah can read one, too. At this point, I'll take Kilborn back because we're not getting Jon Stewart or anyone close to his level and we're certainly not getting anything worthwhile out of what exists there now.