This is How the Military Will be Treated 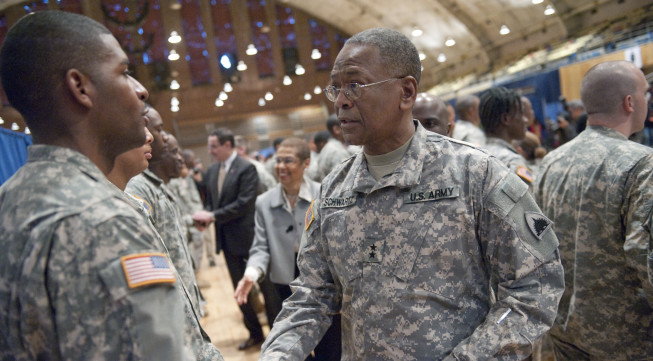 UPDATE: Apparently, they now want the general to stay on in case there are, you know, riots and whatnot.

The Trump Regime has made another demand:

Maj. Gen. Errol R. Schwartz will be removed from his post at 12:01 p.m. on Inauguration Day, just after Trump is sworn in but before the Inaugural parade begins, according to a memo obtained by the Washington Post.

Schwartz has helped plan the security for Inauguration weekend, and he will be charged with overseeing the D.C. National Guard as well as an additional 5,000 troops sent in for the weekend. But he will have to hand over commend to an interim officer in the middle of Inauguration Day.

“The timing is extremely unusual,” Schwartz told the Washington Post on Friday.

“My troops will be on the street,” he added. “I’ll see them off but I won’t be able to welcome them back to the armory.”

This is dangerous. In the event of an issue, you will have troops acting without their leadership. If there's a public safety issue, there will be a serious lack of command and control in the nation's capitol. This puts lives at risk in order to send a strongman's signal to everyone.

Anyone serving on active duty or in the Guard or Reserves should take note of how petty and unprofessional this is. If you've ever had a run-in with the Trump Regime personnel, they're going to come after you and get you back for whatever transgression they think you're guilty of. Forget cordiality and precedent--this is what happens when the comment section at Breitbart starts running the country.

Truly, this is what goes on in banana republics, dictatorships, and junior high.