The CIA Has Been Collecting Information on the Trump Campaign

Buried in the report that appeared on Buzzfeed a little while ago is this little chestnut of information. COHEN as reported above refers to the lawyer for the president elect of the United States. That "company comment" is evidence that the CIA has known for months that there are strong ties between the Republican candidate for the presidency and the Russian government.

In August of 2016, the Central Intelligence Agency knew that there were meetings being held between members of the Trump campaign and Russian officials: 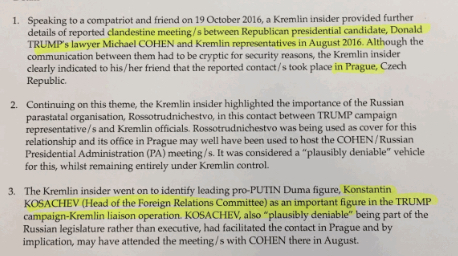 This is way more damning than having sex workers pee in front of you (because that's way more classy than having them actually pee on you).

I think it's safe to say that this is why former CIA director James Woolsey abruptly quit publicly supporting and advising the Trump campaign.

There's the possibility that all of this is bullshit, but, here's the thing--this information has been shared by the individuals at the pinnacle of government for months and no one has leaked it until now. Should regular Americans have access to this information? Absolutely--that's why we have a free press. How much longer are we going to have a free press? Well, not much longer, I'm sorry to say. The pushback on this is coming hard and fast, and it centers on semantics. Much of this information is impossible to verify, but if the standard is, "we think Hillary has been doing something illegal," then, you're damned right it should be out there.

UPDATE: Further corroboration on the veracity of this information, via Malcolm Nance: 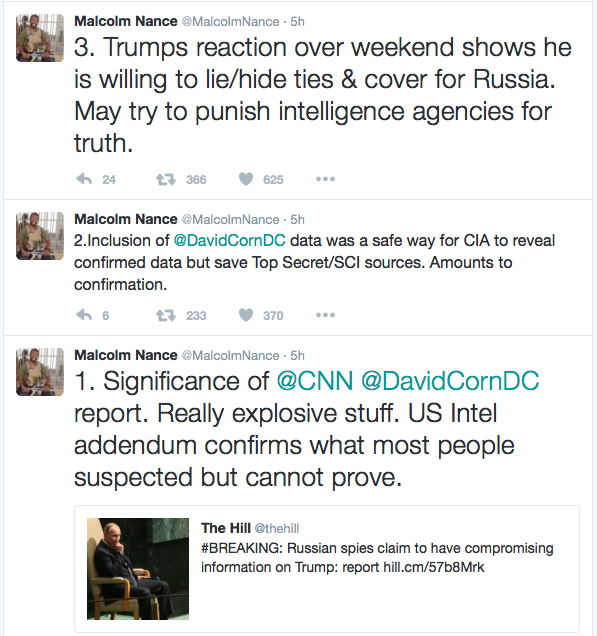