She Was Being Politically Incorrect 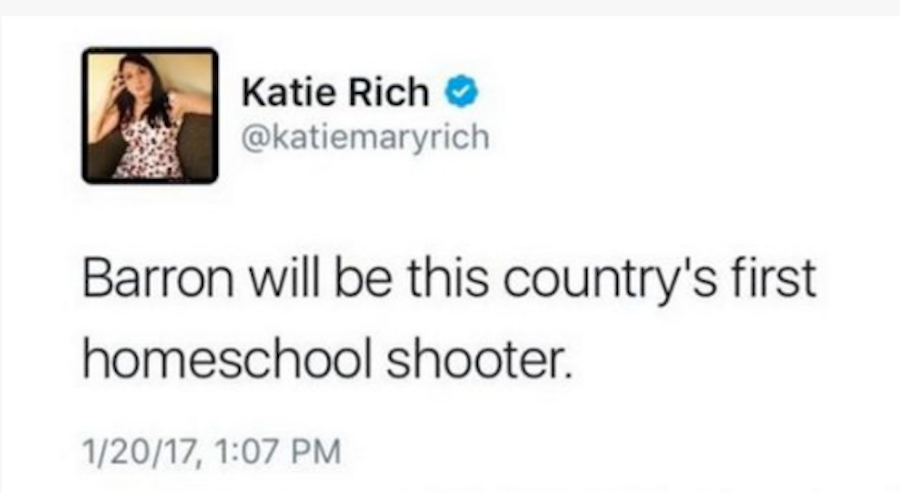 The story of Katie Rich is one that people keep using to confirm their own bias against whatever it is they don't like.

One, she told a joke. She writes jokes. Some people didn't like this one. It's not the end of the world. And, oh by the way, Planned Parenthood came under attack today.

Two, the person she joked about was the son of a billionaire who just got elected President of the United States. She is not exactly punching down here, given that the same POTUS has a long, proud history of mocking people for their appearance. When was the last time you gave to Planned Parenthood? They're gonna need your help.

Three. Her joke was politically incorrect. The very same people defending "Barron" and calling for her to be fired are alt-right trolls who have been telling us for years that being politically incorrect should not subject you to penalties in the marketplace of ideas. Every time one of them gets fired for using the "N" word, it's a tragedy. Every time a liberal does something remotely politically incorrect, it becomes weapons-grade plutonium. But Planned Parenthood, whoa, you know. Things are happening there. Were you distracted?

Rich is probably going to be fired because her parent company just hired Megyn Kelly and Greta Van Susteren away from Fox News so that they can get Republicans to like them. She took the joke down and appears to be ready to pay a penalty here. That's because she's a decent human being. Her detractors have a long, proud history of populating the world with hate, racism, and misogyny. And they get away with it because everyone is ready to denounce a liberal leaning joke teller for not writing the most sensitive joke. And, I'll be damned, no one's talking about Planned Parenthood, so what do I know?

Have you taken your eye off the ball yet? While you were mad at a Saturday Night Live joke teller, Planned Parenthood was ordered to be defunded by Executive Order. Which used to be Tyranny! until it was done by a Republican. As a matter of fact, every time President Obama issued an Executive Order, it was the END of DEMOCRACY. Now, when Trump does it, it's because the media makes him sad because they keep reporting the fact that people don't want him to do the shit three million fewer people voted him into office to do.

See number one. And you're going to feel pretty bad when the kid does come unglued in public, aren't you? His mother seems to be miserable, but who the hell knows? Not the father, because he's mad the media keeps reporting facts that humiliate him and his friends, who are pillaging the treasury, taking away the rights of good people, and are hell-bent on tanking the world economy.