Paul Anka Will NOT Sing For the Trump Regime 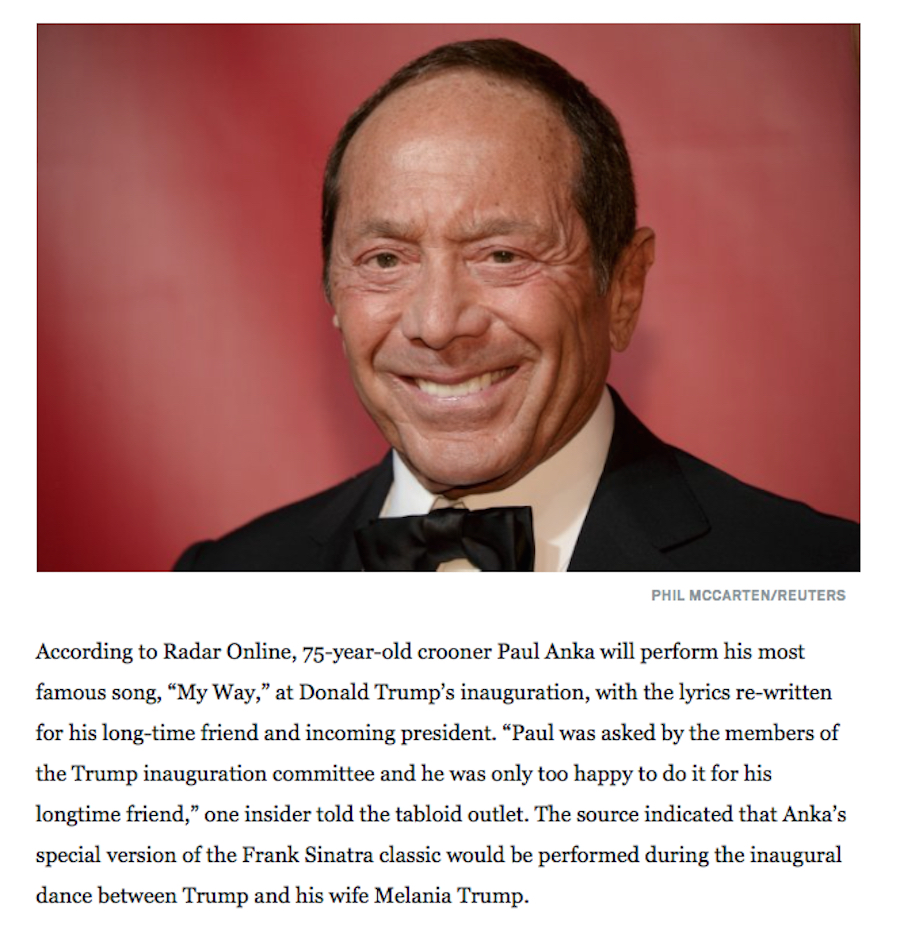 UPDATE: Anka has dropped out of the gig.

Having Paul Anka sing for your inauguration is what, exactly ? Proof that there really isn't any star power in the available choices? Proof that the entire recording industry hates your guts? Proof that you, literally, have to go through hundreds of more popular artists and "settle" for an artist who is, um, not quite where he should be in terms of performing for the newly-elected President of the United States of America? Or is it something more--something like a knock against feminists?

Remember the controversy over "Having My Baby?"

Taken at face value, it's a song about a guy who is glad his wife is having his baby. At first listen, it seems harmless enough. Written at a time when Anka, a former teen idol, was transitioning his career into primarily a touring performer, it was released as a tribute to his wife Anne after birthing four of their eventual five children. While he had tested the waters with DJs a few years prior with the concept, Anka eventually recorded it as a duet with his Gospel-based protege Odia Coates. The song topped the charts on August 24th, 1974, the timing of which lead to a tidal wave of controversy.

At the time of its release the women's lib movement was in full effect, and "(You're) Having My Baby" managed to alienate and outrage listeners on both sides of the political spectrum. While some critics, like Rolling Stone, blasted it at the time (and today) for being overly sappy and sentimental, the song went beyond standard critical scrutiny into the wider conversation about sexism and misogyny.

One of the main points of contention to feminists was Anka's use of "my" instead of "our." To some, singing the lyrics "having my baby" and "what a lovely way of saying that you love me" implied that mothering a child for a man was the pinnacle of achievement women could reach, or that the act of having a baby together somehow wasn't a partnership. The National Organization for Woman gave Anka their dubious "Keep Her In Her Place" award, and Ms. magazine named him "Male Chauvinist Pig of the Year." While Anka himself defends using the word as more of a song-"craftsman" choice, claiming "our baby" doesn't sound right, he did eventually begin ending the song live by altering the lyrics to "having our baby."

If someone picked Paul Anka in order to stick it to the feminists, what does that even mean? Who does that? Who has time to think of these things other than the comments section at Breitbart?