Notre Dame Turns on the President 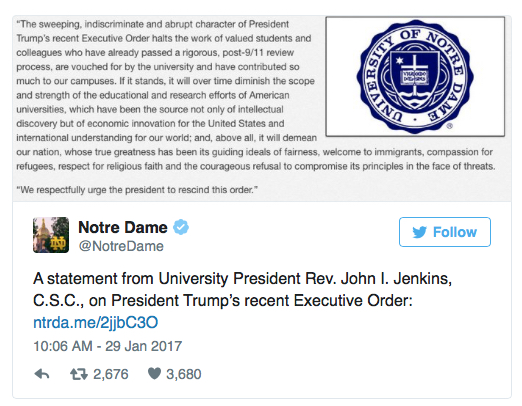 If the University of Notre Dame isn't on your side, you can expect to reap the whirlwind:

Officials at American universities have responded to President Donald Trump’s executive order on immigration -- speaking out against it or advising university members who are from the seven countries affected by the action not to travel outside the United States.

The president of the University of Notre Dame, Father John I. Jenkins, slammed the order, calling its character “sweeping, indiscriminate and abrupt.”

“If it stands, it will over time diminish the scope and strength of the educational and research efforts of American universities, which have been the source not only of intellectual discovery but of economic innovation for the United States and international understanding for our world; and, above all, it will demean our nation,” Jenkins said in a statement.

How powerful are America's elite universities? Powerful enough to force the Trump Regime to back down? Well, we already know they don't care about the rule of law. But if they've lost a significant part of their base--conservative Catholics and elite institutions that are friendly towards restrictions on abortion--then there can't be a way to resolve this that doesn't take into account the effect the travel ban is having on institutions of higher learning.