Madeleine Albright Shows Us How to Resist 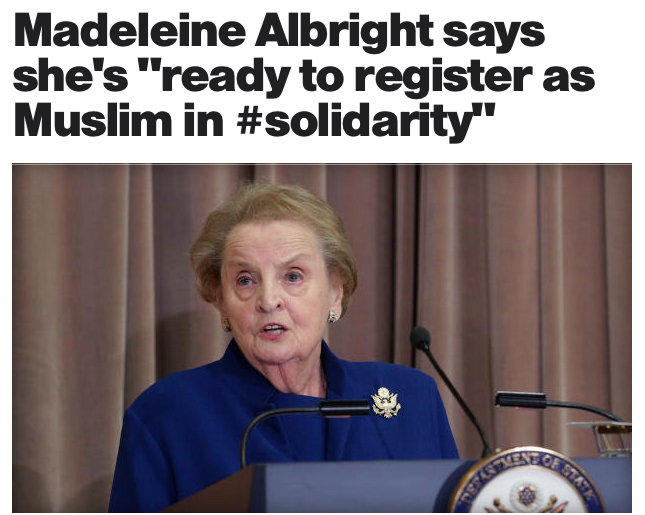 If you're going to resist the crazy new laws and regulations that are coming at us in the weeks ahead, why not follow former Secretary of State Madeleine Albright's lead?

In a tweet posted at 10:18 a.m. Wednesday, Albright wrote, “I was raised Catholic, became Episcopalian & found out later my family was Jewish. I stand ready to register as Muslim in #solidarity.” As of this article’s publication, the tweet has more than 46,000 likes and more than 20,000 retweets.

Within moments of the tweet mentioned above, Albright further emphasized her message by tweeting a photo of the statue of liberty, emblazoned with the words, “ “Give me your tired, your poor, Your huddled masses yearning to breathe free, The wretched refuse of your teeming shore. Send these, the homeless, tempest-tossed to me. I lift my lamp beside the golden door!”

THAT'S how you resist. That's how you demonstrate that these horrible policies are destined to fail. And that's why we need to follow Albright's lead. Yeah, it's very symbolic, and it's not going to change the minds of people gripped by hate, but it does inspire people to do something rather than roll over and take it.

Nobody has ever been able to explain what is "christian" or "American" about excluding people from this country based on their religion.