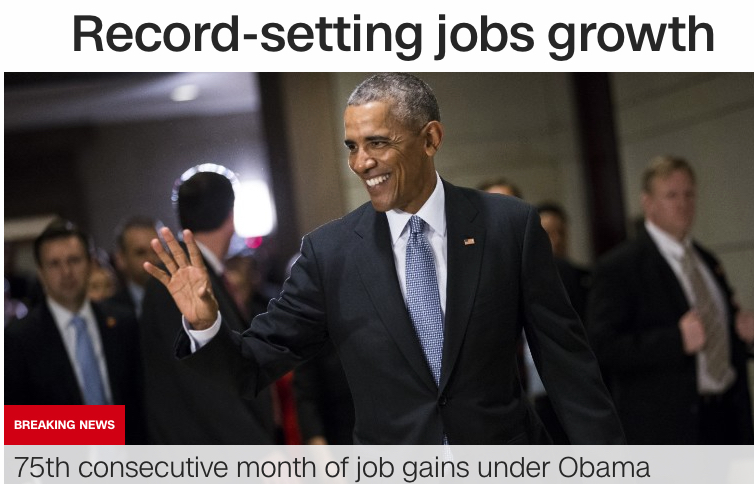 The United States has now seen years and years of steady job growth during President Obama's tenure. In 2016, with virtually no Congressional support, we created two million jobs. The fact that this is going to come to a quick end is one thing, but consider this. In the age of the ignorant tweet, the dismissive insult against the Federal work force, and unchecked fake news, will we ever again see government statistics we can believe?

We're entering a new phase that will, literally, render the things the government says to be suspect. Tax policy is about to change. Trade wars are being threatened. The economy is probably going to be thrown into the air. How do we know we're going to see the truth of what is being done to the American economy?

Do you really think the next presidential administration is going to hold itself accountable if the numbers are bad?

Suppose we're six months down the road and the private sector crashes. I can envision a scenario where, on orders from the White House, job numbers are "massaged" or "adjusted" so that the Kansasification of America doesn't look that bad (check me out on this--they want to do for America what's been done to Kansas). Suppose a dutiful Federal employee releases the actual job numbers for unemployment and we see a spike in the negative numbers. Who's going to accept that as fact? Not the president-elect, that's for sure. The Congress now has the power to make that individual's salary exactly $1 per year. Same for anyone who blows the whistle on incompetence or corruption, as long as they are not exempted under the new rule just passed by Congress. This is going to be the start of a rather chilly era in American discourse. Good luck finding people willing to risk being vilified and forced into bankruptcy in order to tell the truth to a country that really doesn't want to hear it.

The media can't save us. It's too late for that. They will continue to act as stenographers, caught in the false equivalence trap and unable to actually identify blatant lies as such because, well, that would hurt profits and the bottom line.

The chilling effect that this will have--that's one thing. The destruction of reliable statistical information means no one will trust what this government has to say. Between now and the mid-terms, the Republicans are not only going to destroy the economy (because high national unemployment favors management in the workplace, and lower wages force people to struggle for what they can get) but they're going to ruin the credibility of numerous agencies so that no one will know what's going on and no one will be held accountable for what happens.

No matter what gets tweeted at you today, remember this as one of the last days where you could rely on what you were being told. Remember these precious few days in early January as the end of what used to be. What comes now will likely be the destruction of truth, the marginalization of expertise, and the outright dismissal of the suffering of the American people.

The truth has always been a weapon against the people who are about to start running things. They are desperate to knock it out of everyone's hands.