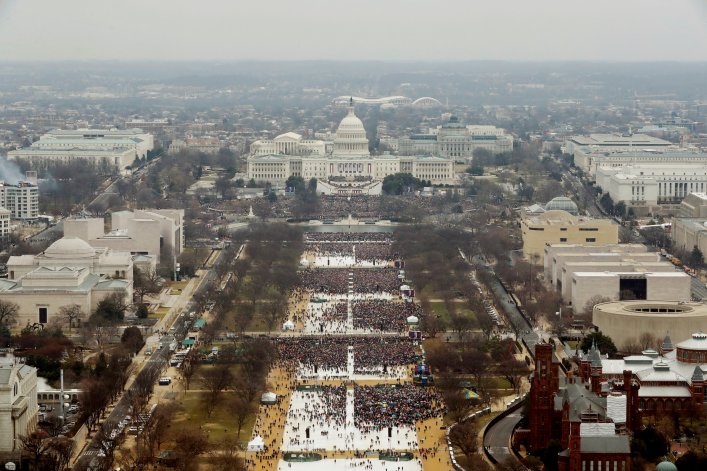 It's day six of the trainwreck presidency, and this is how bad the dumpster fire has gotten:

According to a new report in The Washington Post, President Donald Trump personally called acting National Park Service director Michael T. Reynolds the morning after his inauguration and ordered him to produce photos of the crowd on the Washington Mall that would serve to counter reports that fewer people had attended than four and eight years earlier. According to “three individuals who have knowledge of the conversation,” the Post reported that Trump “also expressed anger over a retweet sent from the agency’s account, in which side-by-side photographs showed far fewer people at his swearing-in than had shown up to see Barack Obama’s inaugural in 2009.” That same morning, White House press secretary Sean Spicer castigated the media for what the administration viewed as false reports about the size of Trump’s crowd. “This was the largest audience to ever witness an inauguration. Period. Both in person and around the globe,” he said, offering no evidence to back up that demonstrably false claim.

If the facts don't match reality, there's always precious time during the day when the president of the United States can bitch at bureaucrats and make insane demands.

Honestly, if this doesn't trigger the 25th Amendment, nothing will. The man is looney tunes.

So, just to catch everyone up to speed--Trump has all day to waste on this nonsense. He's taken a one day story and turned it into the defining issue of his presidency. The Executive Branch is now leaking so badly they couldn't keep anything secret if they wanted to. Honestly, the only reason why we know this is because someone is convinced that it will do some good to put this out there, but they're wrong. This is not going to cause forty or fifty Republican senators to come to together and initiate a review of the president's mental fitness for office. We are not all of a sudden going to get good government, brave leaders, or common decency no matter what anyone wishes. And it's a good thing he doesn't have a habit of skipping national security briefings or delegating evil to people. Besides, if there's anything he needs to know, the goddamned Russians can just send him an E-mail, right?