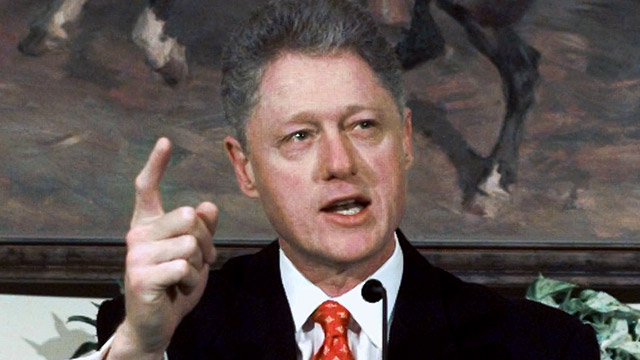 There are quite a few people who remember what it was like when the Monica Lewinsky scandal broke in January of 1998. The events of the last 24 hours are similar to that incident in many ways. For those who do not remember the context of January 26, 1998, I can only hope to give you a few impressions.

The scandal unfolded like a nightmare. Clinton had been re-elected in 1996 and he had to deal with a very recalcitrant Congress. When your lefty friends were making hay last year out of all of the awful legislation that Clinton signed, remember that he signed things he did not want to sign into law. He was famous for that whole "triangulation" strategy, but it was really more about keeping the government functioning and cutting deals to get even the most marginal things he wanted. You should not consider this a full-throated defense of Clinton. It was more about political expediency. The Republicans had shut the government down, various scandals were always being dreamt up by the right-wing hate machine, and there was a country to run.

When Clinton was caught in the lie "I did not have sexual relations with that woman," it completely energized the entire opposition against him. The airwaves, such as they were at that time, were flooded with people like Kellyanne Conway, Monica Crowley, and Barbara Olsen, among others. It created an entire publishing ecosystem that, to this day, sustains Ann Coulter. It unleashed a flood of negative material that, to this day, has never been substantiated.

For example--last year, when the book from the ex-Secret Service agent was released in order to cast more doubt on Hillary Clinton's relationship with those who protect her on a daily basis, it was immediately discredited because the right-wing had gone to that well far too many times for the charges to stick. Domestic violence between the Clintons is an old saw, and it gets dragged out whenever someone is desperate for a new storyline.

Whitewater, the Mena airport, Vince Foster, the billing records, you name it--all of those old records have been playing for decades.

What's happening right now with Donald Trump and #goldengate or #goldenshowergate is much, much worse because this involves a foreign power, a stolen election, truly deviant behavior, and Russia's kompramat strategy being used to subvert democracy. All over Europe, Russia is using these tactics to undermine the Western world.

In America, they have succeeded into making the president elect of the United States of America their personal whipping boy. Bill Clinton was damaged, but he survived largely because he governed this country while having to answer scurrilous charges day in and day out. What goes around comes around and the effort to delegitimize Clinton that carried into the 2016 election and was used against Hillary has now brought us to a point where we are seriously having to consider whether we should be putting a man who had his campaign staff coordinate strategy with the Russian government in charge of our military.

This is way, way worse than anything that happened in the 1990s. Easily.