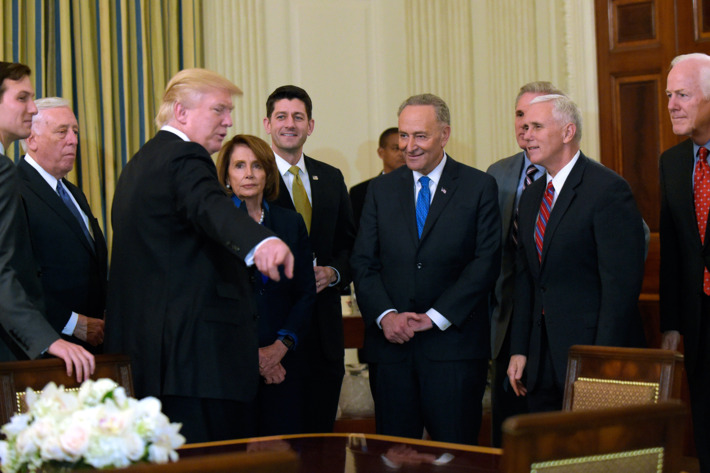 It would be foolish for Democrats to work with President Trump, and Jonathan Chait lays out a pretty good case for not giving in to his infrastructure demands. I agree with what he's saying since there's no reason for anyone to believe anything Trump says:

In theory, it might make sense for the public to conclude that Democrats are doing a better job than Republicans of helping Trump govern. In reality, that is not how they think at all. If Trump passes a bipartisan bill, it will make Trump more popular, and thus Trump’s party more popular. Democrats’ success in the next two elections will be determined by Trump’s approval ratings. The lower his ratings, the better Democrats will do. Voters are not going to reward Democrats for proving they can get stuff done with Trump.

To be sure, it would be awkward for Democrats to openly oppose infrastructure spending after having supported it for years before. The easy way out for them would be to follow Arizona Representative Ruben Gallego’s proposal to deny support for any infrastructure bill unless Trump releases his taxes to prove he would not personally benefit. Trump might get away with unprecedented corruption in office, but why not make Republicans in Congress bear the sole responsibility for this destruction of long-standing norms? Why should Democrats participate?

But Senate Democrats have not imposed any such condition on their infrastructure plan. Matt House, a spokesman for Schumer, told me, “Our position is that the president should make his returns public, that he shouldn’t earn any money off of this bill, and that he should support the legislation.” In other words, Democrats will not require any mechanism to ensure that Trump and his family do not profit off the bill as a condition for supporting a bill. That means they are willing not only to give Trump the political win he craves but also to tacitly cooperate with his obliteration of long-standing norms.

At some point, the American people will crave normalcy and demand it. When is enough enough? How much jackassery can people take?

I think the demand for competence is very high right now and we should have left the campaign stage behind months ago. We're in the governing phase, but Trump wants to bask in adulation and say crazy things over Twitter in order to get a jolt of energy from his supporters. This need for constant affirmation has derailed the first week of his presidency. This is not how you govern, and the campaign ended a long time ago.

I don't hear much talk about this, but, when it suits him, Trump will abandon the Republicans and embrace the Democrats if he thinks it will give him what he wants. He is utterly without principle and surrounded by unqualified yes-men. The Democrats could encourage this, and trick Trump into turning his back on the GOP, but what would that give anyone? A reason to impeach him and remove him from office? A way out of this mess?

The United States needs a normal, functioning government that does not terrify its own allies. It needs a return to normal business. When everything is unsettled, the American people tend to start paying attention to what politicians are doing, and that never works out well for incumbents. And I do think that the notion that the president is unfit for office and may trigger a 25th Amendment showdown is a real possibility.