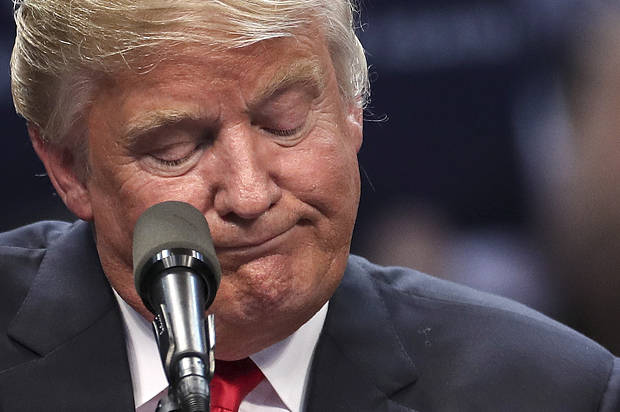 The Trump Campaign is a bad sitcom--a fiasco and a con game being played out in an artificial media bubble. There's nothing real or viable about it anymore. A decent media organization would simply decline to report on whatever bullshit is being dropped out on the sidewalk for all to see, but that would hurt revenue and the bottom line for these companies. In the old days, CBS News would assign a third string entertainment reporter to this and focus on how Hillary Clinton will move legislation through a Congress that is now in play.

Come on. The Trump thing is done. It's over. There's no ground game, no professional political organization, no one is in charge and nothing good is going to come out of pretending that Trump has a chance in hell to win anything. The plot has been lost. The only thing missing is for someone to say out loud, "this is just so crazy, it might work."

Donald Trump declared Friday that there's only one way he could lose the state of Pennsylvania: if he's cheated out of it.

"We're going to watch Pennsylvania. Go down to certain areas and watch and study and make sure other people don't come in and vote five times," he said at a rally in Altoona, Pennsylvania. "If you do that, we're not going to lose. The only way we can lose, in my opinion -- I really mean this, Pennsylvania -- is if cheating goes on."

Trump said that Republican leaders in the state "are very concerned" about the possibility of cheating -- adding that "we have to call up law enforcement, and we have to have the sheriffs and the police chiefs and everybody watching."

Hillary Clinton's lead in the polls in Pennsylvania is solid -- a Quinnipiac survey of likely voters released Tuesday found Clinton leading Trump 52% to 42%. But both candidates are devoting significant resources to the state, which has a base of working class voters that Trump's campaign hopes could work in his favor.

Is there an adult in the room who can tell him that voter fraud is a myth? Is there someone who can explain to him that Pennsylvania is not going to go his way in November?

Nobody is going to cheat him out of a state he has no chance of winning. No one is even thinking of such a thing, except for whoever put this nutty idea in Trump's head a minute before he said it out loud and got the response he wanted.

Trump's looking for an alibi, a scapegoat, someone on whom he can pin the blame when everything flames out. He has Reince Priebus, he has the waffling presence of over fifty semi-decent Republicans, and he has a system whereby the American voter actually chooses who wins the Electoral College votes in each state. There's plenty of blame that he can assign to whichever of those ends up being the "reason" why he is losing this race.

And, really, in the days and weeks ahead, that's the game he's going to play. This thing is lost. There is no horse race anymore. Democrats are going to come out and vote for Hillary and Republicans are going to stay home. This campaign has been marred by the presence of an outlier who couldn't even bother to find someone to help him win Ohio. The Trump campaign has conducted a series of vanity appearances in places Trump has no chance of winning but are geographically convenient so that he can sleep in his own bed at night and not have to deal with the rigors of a real campaign. This is not a real campaign anymore. This is a joke.

Ain't nobody laughing, but it's a joke nonetheless.