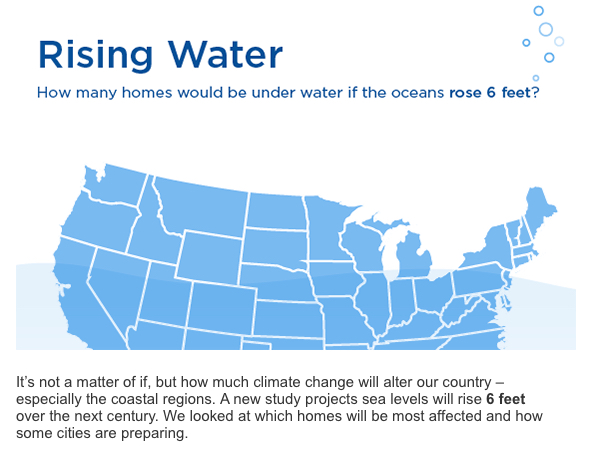 How often does Zillow remind you that real estate values in coastal areas are about to go underwater and by that I mean actually under the surface of the water.

Nearly 1.9 million homes in the United States would be flooded if the seas rose six feet.

Despite record-warm years and some crops already reacting to unusual shifts in the weather, climate change for many people remains an issue for the future. That future came a little closer this year, when scientists studying Antarctic ice loss reported that if carbon emissions continue unabated, sea levels could rise six feet this century — significantly higher than previous predictions of a two-foot rise by the year 2100. 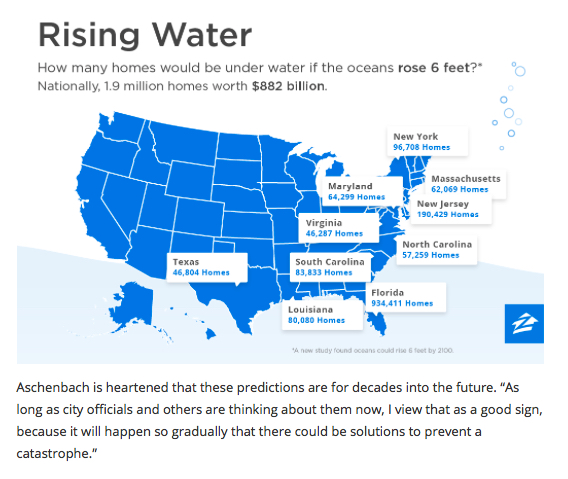 If the oceans rose six feet today, 1.87 million homes in the United States valued at $882 billion would be flooded by sea water, according to a Zillow Research analysis using data from the National Oceanic and Atmospheric Administration (NOAA).

Doug Aschenbach, a retiree from Ohio who lives in a Fort Lauderdale high-rise, figures it would take fewer than six feet of water to have a significant impact in his area. Indeed, Zillow’s analysis shows Fort Lauderdale is the U.S. city that would have the most homes under water — more than 38,000 — if the ocean rose six feet.

Don't worry--Trump's got everything sorted out. He's going to have walls built around his properties so you can just go suck eggs:

In January 2014, he publicly wondered how the United States could be spending money to combat what, in his words, was a “GLOBAL WARMING HOAX.” In October, when Trump was bitten by the autumnal chill, the Republican presidential candidate snarked on Twitter that he could use “a big fat dose of global warming.” He told The Washington Post editorial board in March that he is “not a great believer in man-made climate change.”

But when it came to protecting his own investments from global warming’s effects, Trump canned the screaming capital letters and jokes. Instead, Trump wants to curtail climate change with a wall.

The Trump International Golf Links Ireland, a golf course by the sea in Ireland’s County Clare, faces the Atlantic’s pounding waves and coastal erosion. As Politico reported Monday, the Trump Organization has submitted a permit to build a sea wall, which cites rising sea levels from climate change as a threat. Not just any wall will do — one plan called for a limestone barricade 20 meters wide, what Friends of the Irish Environment’s Tony Lowes described to CNBC as a “monster sea wall” in March.

As part of the approval process to build the sea wall, Trump International Golf Links filed an environmental-impact statement. It includes specific concern for erosion, beyond one governmental study that did not take into account sea-level rise from climate change, according to Politico.

But, of course, this is all Hillary's fault, who created global warming to distract from her founding of ISIS and all of those murders, so what are you going to do?