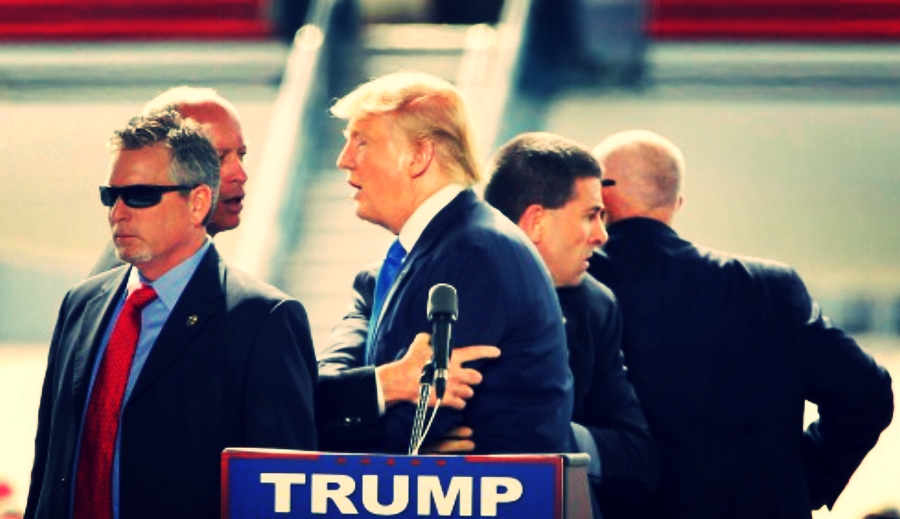 There is a conflict of interest brewing in the wake of Donald Trump's insane comments about how people with guns might be able to stop Hillary Clinton from appointing judges:

The official said that if they were still working at the U.S. Secret Service, they would contact someone on Trump’s campaign staff to have a conversation about whether he understands the consequences of that rhetoric.

At a rally in Wilmington, N.C., Trump said that if elected Clinton would get to appoint federal judges to lifetime positions, including a vacant seat on the Supreme Court.

“If she gets to pick her judges, nothing you can do folks. Although the Second Amendment people, maybe there is, I don’t know,” Trump said.

The former Secret Service official said they would ask a U.S. attorney to see if Trump broke any laws with the comment.

“Look, this guy is coming pretty close to the edge here,” the official said.

The official added that the Secret Service would have to consider the value of having agents interview Trump. But “if this was some guy off the street and they made that statement, you’d go out and interview them,” the source told TIME. “He’s not gonna act on this. But you don’t know what you’re encouraging other people to do.”

In the photo above, that's the Secret Service providing protection to Donald Trump. These same agents are now going to have to ask themselves, how long before members of our own agency come and interview Trump in order to determine whether or not he understands the implications of what he says in public? And where has this ever happened before? How can these agents protect a man who called for gun violence against another person under Secret Service protection? Trump's threat puts the entire protective arm of the Secret Service in physical jeopardy.

You can say whatever you want about the last ten Republicans nominated for the presidency--hell, damned near all of them going back to Lincoln--and the utter indecency and shock of what Trump said yesterday is something none of them would say in public (yeah, Nixon in private, sure). We laughed at Mitt and McCain, but they are statesmen beyond reproach compared to Trump. We all thought Bush was the worst president ever, but he looks a lot better in light of what Trump would do to the rights of Americans if he ever had the ability to pick up the phone and call the Director of the FBI.

There have always been unspoken rules about how a politician conducts themselves in American life. Appearing to be crazy, unstable, or violent usually meant that the candidate would be disavowed by either party and forgotten quickly. These norms have been followed for many, many years. Donald Trump subverted that quiet authority and has operated outside of the basic parameters of public discourse and ethical conduct since day one. It is populism backed with threats of violence--carried out on protesters or on anyone who criticizes Trump or opposes him. This is very real, very evident, and it is well past the time for law enforcement to step in and regulate Trump's behavior.

All Secret Service protection should be withdrawn from the Trump campaign. The Republicans have to foot their own bill from here on in. This is absolutely beyond all understanding of what is acceptable. We are in dangerous territory and the results of this election are going to be contested by a violent minority of Trump's supporters. There's no way the Secret Service should be involved in any of this from now on.