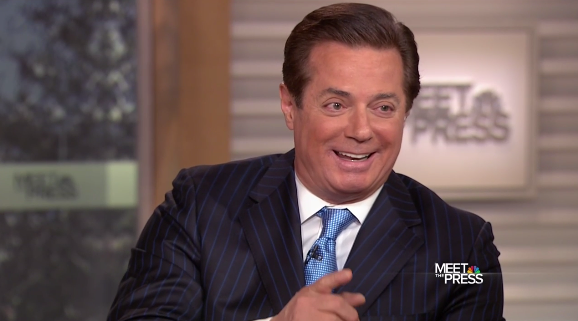 Paul Manafort is probably the crookedest campaign manager in a hundred years. Why isn't he scheduled to appear before a House subcommittee? Well, as the saying goes, he's a Republican, so his ties to criminal regimes overseas are just another Democratic plot to steal the election from Donald Trump:

Ukrainian anti-corruption investigators in Kiev say they have found the name of Donald Trump’s campaign chairman in a secret ledger left behind by ousted President Viktor Yanukovych. The ledger reportedly shows $12.7 million in undisclosed cash payments meant for Paul Manafort from Yanukovych’s political party from 2007 to 2012. Investigators say the document detailing cash payments is proof of an illegal scheme of kickbacks and bribes that includes election officials in addition to Manafort. Although it’s no secret that Manafort worked for Yanukovych, the alleged cash payments designated for him have not previously been reported. It was unclear whether he ever actually received the payments. But Vitaliy Kasko, a former top official with the general prosecutor’s office, told The New York Times that Manafort must have understood he was involved with a corrupt leader. “It would have to be clear to any reasonable person that the Yanukovych clan, when it came to power, was engaged in corruption,” Kasko said.

In a statement early Monday, Manafort accused the newspaper of “purposefully” ignoring the facts of the case. “I have never received a single ‘off-the-books cash payment’ as falsely ‘reported’ by The New York Times, nor have I ever done work for the governments of Ukraine or Russia,” he said, adding that his Ukraine work ended following the country’s parliamentary elections in 2014.

Manafort's ties to the kleptocratic regime that ran Ukraine are a huge deal in terms of assessing who Trump will owe favors if he gets elected (let's not forget that Trump could probably win a Senate seat in Mississippi right now or a House seat in Florida--unlikely, but white supremacy has a certain constituency). He may or may not have skirted the laws requiring him to register with the State Department as a foreign lobbyist. He may or may not owe a Russian billionaire more favors than the party store has on hand. He may or may not be bought and paid for with $12 million dollars in money stolen from the Ukrainian people.

Who the hell knows? If he were a Democrat, his ass would be sitting in front of Trey Gowdy right about now. And doesn't this all sound like an Ivanka Trump plot to get rid of another campaign lackey so that blame will not fall on Daddy's orange shoulder blades?