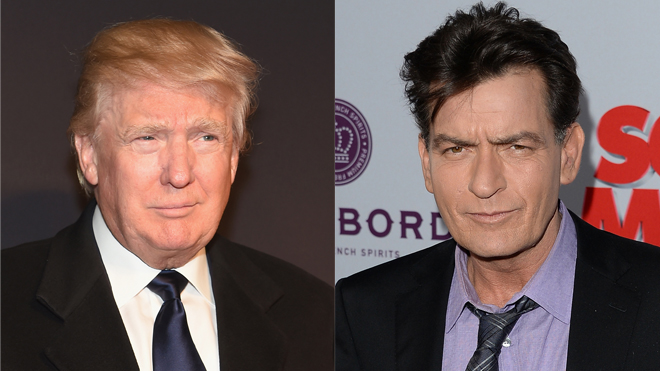 I haven't seen a public meltdown like this one since Charlie Sheen decided to start playing to the TMZ cameras that were out looking for someone else.

This election has entered into a phase that is so crazy and disjointed that it requires a pause of some kind--a break in the action, a stoppage of all of the relentlessly downbeat and fearful stories that have come flying in over the transom. Donald Trump has utilized the playbook that Charlie Sheen ended up getting burned by when he made himself available to the public while losing his shit. These are two similar masters of public manipulation. The absence of an adult who might say, "this is not worthy of being broadcast because it is fake and has no redeeming quality" is being felt throughout the entire media landscape. There are people in New York City right now who are hyperventilating because Trump might actually leave the race. This will leave the media organizations they run with fewer clicks and views.

If Trump were to drop out, the flow of traffic to news sites might drop to the point where millions in advertising revenue would disappear. Never mind what this is doing to the country--someone somewhere is doing just fine pandering to insanity.

In the space of a few days, Donald Trump turned himself into a caricature of a responsible human being. He threw babies out of his rallies, he insulted decent Americans, he ate Kentucky Fried Chicken with a knife and fork. What the hell?

As bad as it gets, there have always been worse times in America. I was born in the fall of 1968. I was born after both Martin Luther King Jr. and Bobby Kennedy were dead. I was born weeks before Richard Nixon was elected President of the United States after sabotaging the peace talks in Paris. Some 16, 899 Americans were killed in action serving in Vietnam. This year has been awful, but it has not been as bad as 1968, and that's saying a lot.

Trump's complete and utter meltdown hasn't even found the bottom yet. It's barely 4PM on the East Coast. I can guarantee you, by sundown, Trump will have said and done something awful, something so terrible I'll just go and look for something else to write about.

But, yeah. America will be fine. The only thing I am convinced of is the ability of this country to move forward and make increasingly better and better choices and avoid giving in to the demands of a bloodthirsty demagogue. America has rejected the path laid out by people like Donald Trump and Roger Stone often enough that I don't thing there's anything to worry about. Yesterday, I said the country was stupid. It's not. There are a lot of stupid people.

What gives me hope is that none of them know how to vote.