Trump Won't Even Sleep in Cleveland 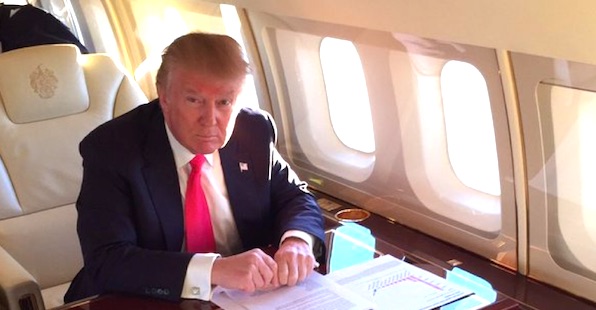 The Republican National Convention is well underway, and now is the time to press the flesh and raise money. Donald Trump needs to appear as often as possible in order to maximize this opportunity to draw in as much support for his campaign as possible.

On a bright sunny Tuesday morning, the Trump Leadership Council gathered atFirstEnergy Stadium for their second official meeting. The group of 40 CEOs and top executives had flown to Cleveland to attend the Republican National Convention and meet with the nominee presumptive, billionaire businessman Donald Trump.

This was the second meeting of the council; the first convening happened a few weeks ago with the nominee presumptive at Trump Tower in New York. The companies represented were there to ostensibly advise Trump on 10 business sectors, such as transportation, healthcare, etc. But it was understood that each of the companies had either already donated money to his campaign, or would in the future—and most were sponsoring convention-related events in Cleveland, according to three people involved in the council.

The group of 40 from companies such as Continental Resources, BNSF Railway and C Spire mingled with Republican members of Congress around breakfast tables set up on one of the stadium’s concourses. The Republican representatives addressed the group, ostensibly stalling for Trump. Rep. Tom Price from Georgia mentioned the plagiarism scandal over Trump’s wife Melania’s speech the evening before. Price blamed the liberal media, who he said, had made the whole thing up, according to people present.

Eventually, though, the speeches ran out and Trump never showed. He had, they found out later, unexpectedly flown back to New York overnight with no word on when he might return. The group was led out to the football field, where the Cleveland Browns play, to take pictures before they were let go with no information about when and if a third meeting might take place.

I don't know what's funnier--the fact that Trump figured he didn't even have to sleep in Cleveland during the convention or that he basically told a large group of corporate CEOs and their assorted hangers-on to go pound sand. Could there be a bigger "fuck you" than finding out that Trump wasn't even in town?