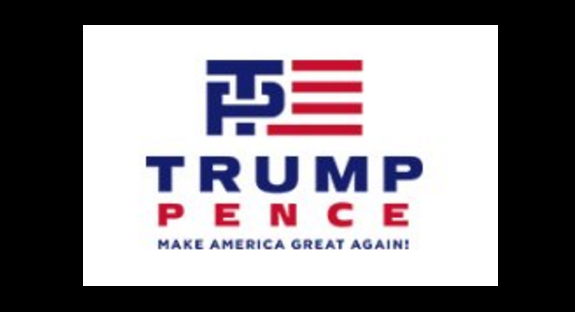 Okay, the joke's over.

The Donald Trump campaign is a high-level satire and a joke on all of us. We've been pranked, Onion-style, and now we can see how it all unraveled.

There is no way that the "T" in Trump should penetrate the open hole of the "P" in Pence unless someone somewhere is running a con on the American people. If it isn't obvious, look at how the Capital "T" is ramming itself down into the gaping maw of the open and willing "P" that is positioned right below.

Well, this is happening, folks! pic.twitter.com/rMPndOVF7F

Trump imagines himself as the jackhammer and Pence as the symbol of a Republican Party, taking it from on high.

As the man said, Jeeeeeeee-zus, that's some dirty stuff there.

It's an obvious piece of satirical commentary and it's not subtle in how it is being executed. That is, if Pence even is the pick.

What could be happening here is another example of how Trump likes to control and jerk around the media. This could be the phony logo designed to play a crass, tasteless joke on all of us who actually care about what happens to this country.

The Trump logo tells America, in no uncertain terms, bend over because you're about to be penetrated. You're about to be given the shaft and the high, hard one. Whoever designed the Trump-Pence campaign logo tipped their hand a little too far, and now we see that there's a man standing naked behind the curtain. He's wearing a lot of Axe, he has the hook'em horns thing going, and he's an emotionally stunted fifteen year-old. His tongue is hanging out and he doesn't give a shit.

Of course, this could be the real logo and the talentless hacks working for Trump are too fucking stupid to connect typography with symbology. Yeah, that's the better take on this. Better bring your own lube.