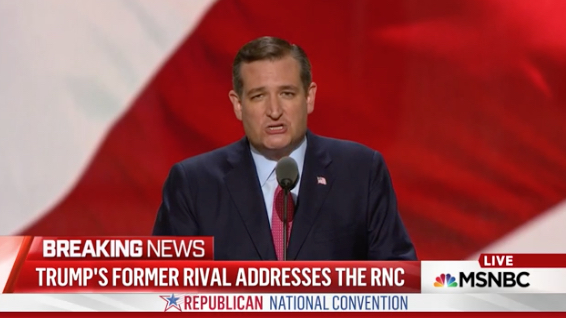 This is the face Ted Cruz makes when he's screwing you over. [/caption]

I don't know how you would interpret what Ted Cruz said tonight at the GOP convention as being anything other than a call to vote for Hillary Clinton over Donald Trump:

Sen. Ted Cruz walked on stage to extraordinary cheers, and walked off to deafening boos after the Texas senator and former Donald Trump rival failed to endorse the party's nominee at his own convention.

If you don't endorse Trump, you're basically telling everyone that they have to vote for Hillary. Or maybe you don't vote for president at all.

In any event, Ted Cruz served up a big, fat pitch over the middle of the plate:

Moments after the remarks of Senator Ted Cruz... [/caption]

It's an interesting strategy for Cruz because, at some point, he might want to run for elected office again. I would suspect that the Republican Party is deep into the process of finding a viable primary opponent to run against him and that there are at least eighty members of the United States Senate who are willing to throw a few grand in the pot to help that person beat Cruz like a drum.

The GOP convention is so badly stage managed that you cannot come away with anything other than a gut-busting laugh watching this shit show unfold. They let Ted Cruz go on stage in prime time before Mike Pence and make everything about him. What a fucking horror show. If they have one more bad night, the convention "bounce" out of Cleveland is going to look like the Hindenburg going down in flames.