Newt Gingrich Makes An Ass Out of Himself 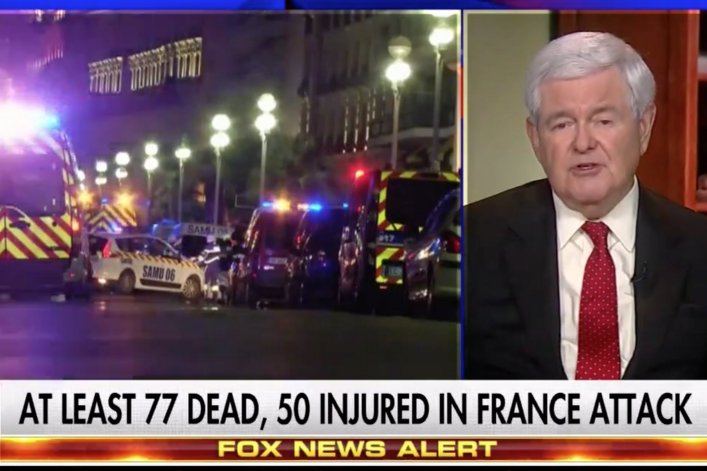 Newt Gingrich decided to make himself look about as anti-Muslim as he thought he could get away with so that Donald Trump could pick him over Mike Pence:

In response to the terror attack in Nice, France, that left at least 80 people dead, loyal Trump supporter and potential Republican vice-presidential pick Newt Gingrich suggested the United States test every Muslim living in the country and deport those who believe in “sharia” law. “Let me be as blunt and direct as I can be,” the former Speaker of the House told Fox News host Sean Hannity. “Western civilization is at war. We should frankly test every person here who is of a Muslim background and if they believe in sharia, they should be deported.” He added of the inherently controversial and outwardly bigoted proposal: “Sharia is incompatible with western civilization. Modern Muslims, who have given up sharia, [we are] glad to have them as citizens.” Gingrich also said it should be a felony for anyone to visit a website “favoring ISIS or al Qaeda.”

A felony to visit a website, you say? Well, we know how Gingrich feels about the Bill of Rights now, don't we?

A test for every Muslim? What the hell kind of bigotry is this? What would possess anyone to propose such a thing? It's ludicrous. Who is to write and then administer these tests? Tens of thousands of government workers will need to be hired and trained and then given test materials. Who would pay for this? Would we raise taxes in a Trump Administration to pay for a test given to every self-identifying Muslim in America?

This is crazy talk. This is insanity. It's almost too much to believe anymore, the balls on these men. It is the kind of decency that should induce incandescent rage in everyone who knows what America is about. This is so resolutely un-American as to not be believed. Did an escaped mental patient say this? Because, truly, an escaped mental patient would be more coherent and thoughtful than a man who was once a Speaker of the House of Representatives in the United States Congress. Shame on him and shame on us for ever having tolerated such a thing to have happened.

This is bigotry on a slow boil. It's designed to make hay out of the terrible attack in Nice while positioning Gingrich as a "reasonable, thoughtful" Republican who can fit in with Donald Trump's brand of white supremacy gone horribly wrong. It's jackassery in public, that's all. Gingrich is millions of dollars in debt, everything he has ever touched has turned to shit before his eyes, and he desperately needs to return to political power and influence in this country.

Trump has been jerking him around for weeks and now he's going to jerk him around some more. The next few days should be viewed as a window into the soul of the modern Republican Party--a deep, empty hole, filled with horror, screaming, fear and overweight white men who have everyone and everything they cannot control.

Fuck Newton Gingrich forever. Fuck this man into obscurity and poverty. His mind is the one that is shot. His pathetic grasping for power and money is so evident it's a wonder he didn't have his hat in his hand when we went on television. God, these are horrible people and these are horrible times.