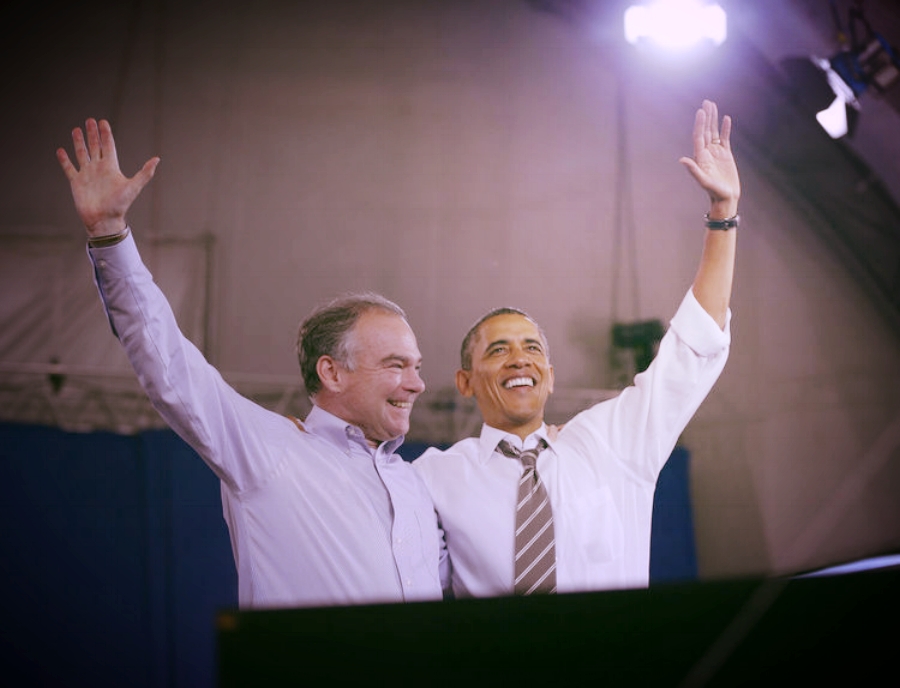 It was Tim Kaine's victory over George "Macaca" Allen four years ago that put him in the position that he's in now:

Former Virginia Gov. Tim Kaine won one of the most expensive and consequential U.S. Senate races in the country Tuesday, delivering Republican George Allen a second consecutive razor-thin loss and ensuring that the purple state again will have two Democrat-blue senators come January.

With 99 percent of precincts reporting,  Mr. Kaine held a 52 percent to 48 percent lead over Mr. Allen, according to unofficial results. The two were competing for the seat of retiring Sen. Jim Webb, a Democrat.

Mr. Allen, speaking to supporters in Richmond, conceded the race just before 11 p.m.

“I’ve called Tim and congratulated him,” Mr. Allen said. “We still remain friends personally, and that’s an important thing. I’ve congratulated him and pledged my support as he takes on the task of [representing the people of Virginia].”

There's a lot to note about that Senate race from four years ago. Kaine beat a well-funded, media savvy movement conservative in a state that absolutely bleeds red for Republican ideals. He went through a massive amount of negative advertising funded by one of the biggest state organizations in the entire GOP, one with a great deal of on-the-ground talent in the D.C. area. And he won without being bloodied.

Virginia was a huge victory for the Obama campaign--a southern, traditionally red state was flipped blue, thanks in part to huge wins in the northern counties surrounding Washington D.C. That's where Tim Kaine was able to rack up his win, and he did it by embracing the President and his legacy up to that point. Hillary's selection of Kaine should be read as not just a safe, moderate pick but as a link to the kind of campaign that can embrace the president's legacy and win states like Virginia.

Tim Kaine ended George Allen's political career. Full stop. That not only gets him into heaven, it should earn him a place in your heart.

Embracing the far left right now is a strategy that the Clinton campaign has shied away from. They didn't go with Elizabeth Warren and they didn't reach out to Bernie Sanders. They know the distinctions between her and Donald Trump are pretty stark and if they offer up moderation and a guy who could beat a jackass like George Allen and remain cordial, they'll have a candidate who can take Mike Pence to the woodshed.

Granted, the Vice Presidential pick is seen as a "don't screw it up" move. Hillary did NOT screw it up--she helped herself compete in a swing state and she chose a candidate with enormous appeal to the centrists who might be concerned about her agenda. Trump screwed up by choosing a man he wanted to dump the night before it was announced--a man who wants to take away rights rather than protect them. The contrast between the two visions is easy to see--it's dark versus light, good versus evil, decency versus dictatorial excess.

The bottom line is, you cannot call voting for the Democratic ticket "risky" anymore. There is no radical agenda to remake America or tear the government to pieces. I would prefer a slash and burn Democratic-populist appeal, one that makes fun of the fact that Trump is a fake billionaire and Pence is a phony who wants to take rights away from the American people. I would have been happy with a Clinton-Warren ticket but that's only because I would love to see Elizabeth Warren in charge of reforming the regulatory aspect of the Executive Branch. Someone needs to infuse our watchdog agencies with some energy and some authority. That would be a great job for Kaine, allowing him to be an active participant in the extension of President Obama's agenda.