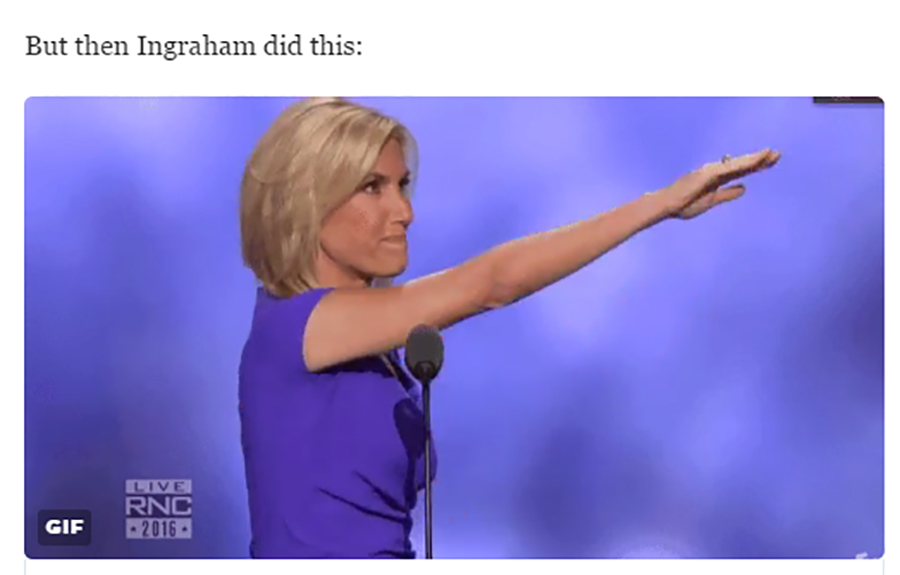 Of course, both sides wave at crowds, so this is probably nothing, but, damn. If you're going to make an impression on the American people, why not give the Nazi salute in the direction of Donald Trump after praising him to the rafters, right?

Laura Ingraham has always been a steaming turd pile of a human being, not worth engaging or following on any level other than the one where her ignorance can be mocked and her public pronouncements fed into the river of filth that runs in the gutter on the bad side of town. She has a whole history of this sort of bullshit and it runs parallel to Ann Coulter's lifelong grift. We've already discussed her too much. 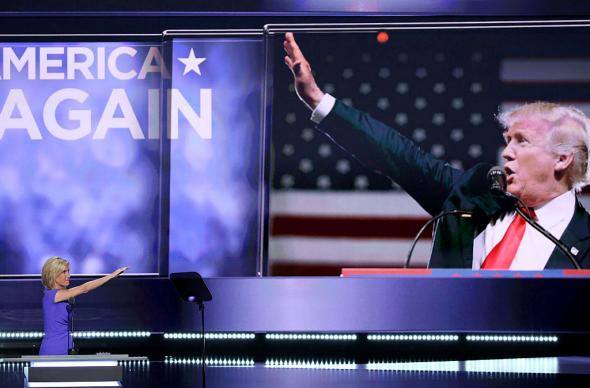 You're going to see and hear some pushback on this, and you're going to see claims that the video was "deceptively" edited. I watched her speech, and at the end, she clearly goes to her left with the extended salute, with her palm downwards, and holds it for a moment. There was no deceptive edit. The screen captures tell the whole story. Do you wave at crowds with your palm down? Instinctively, a normal person--and look at the evil wretch of which I speak--waves with their palm facing the person and they go side to side. Not Ingraham--palm down, perfect extension, and then the rehearsed shift into normal waving.

Do I really think Ingraham is a card-carrying member of the Nazi party? No, of course not. If she was, she'd brag about it on the her show. She is truly an awful person with a long history of being unbelievably horrible to the very idea of America. She is a shorter version of the same thread of ignorant evil preached by Coulter. They are two reliably awful sides of the same coin of the Republican realm. Today, she is reveling in the attention and knows exactly what she did and why she did it--the spotlight is fleeting, and liberals are easy to rev up. This is her schtick.