Get a Load of This Jackass 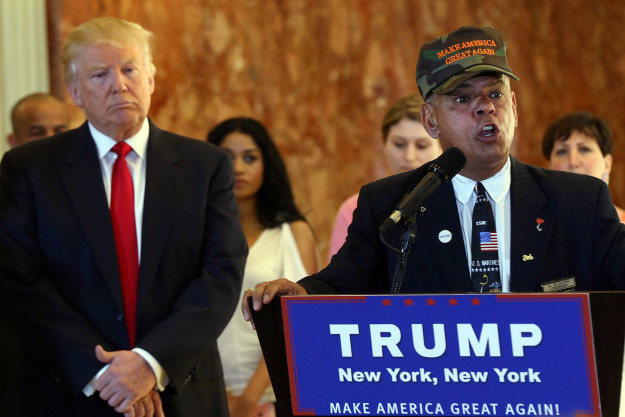 The unhinged rhetoric being directed at women these days is astounding. It's not just Hillary Clinton--it's any woman anywhere who is on the Internet when men feel like unloading. You don't even have to guess who this guy supports for president:

An adviser to Donald Trump on veterans issues said on Tuesday that Hillary Clinton should be put in a firing line and shot for treason.

New Hampshire state representative Al Baldasaro, who is also a Trump delegate from the state and has appeared with Trump at campaign events, made the comments on the Jeff Kuhner Show.

“I’m a veteran that went to Desert Shield, Desert Storm. I’m also a father who sent a son to war, to Iraq, as a Marine Corps helicopter avionics technician. Hillary Clinton to me is the Jane Fonda of the Vietnam,” he said. “She is a disgrace for the lies that she told those mothers about their children that got killed over there in Benghazi. She dropped the ball on over 400 emails requesting back up security. Something’s wrong there.”

“This whole thing disgusts me, Hillary Clinton should be put in the firing line and shot for treason,” he added.

Baldasaro has spoken at several Trump events, introducing Trump multiple times, including at an event in late May where he admonished the media for focusing on questions over Trump’s donations to veteran’s charities.

He later added in the radio interview that Clinton was a “piece of garbage.”

Meanwhile, the number of people trying to put some distance between themselves and this ass clown increased exponentially when he realized that he was about to be interviewed by the United States Secret Service.

I can't wait for the news story on this to include the observation that there are Black Lives Matter activists who are saying terrible things, too. Both sides do it, of course.

What a bunch of bullshit.