George Will Links Trump to the Russian Oligarchs 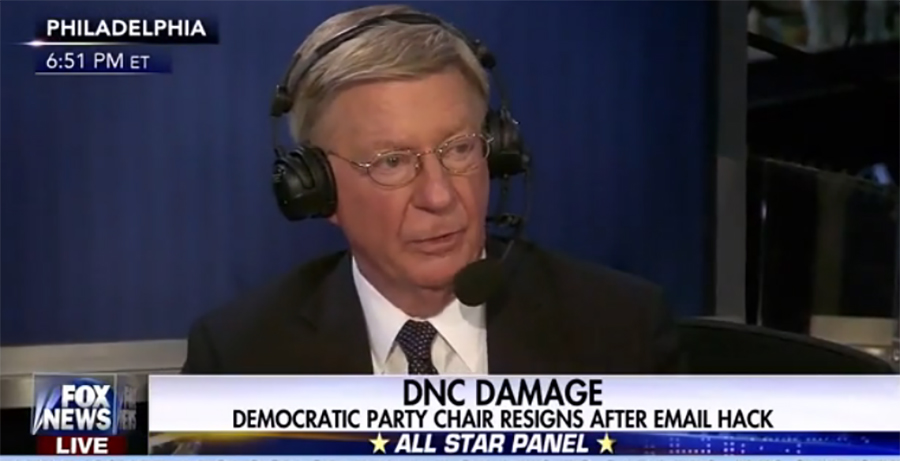 The fact that this is being discussed on Fox News by George Will is amazing:

BRET BAIER: Both the campaign chair and anybody you talk to, including Senator Murphy would not go down that road once pressed on the connection between Russia and the Trump campaign. But they have thrown it out there. George?

GEORGE WILL: Well, it's the sort of thing we might learn if we saw the candidates' tax returns. Perhaps one more reason why we're not seeing his tax returns because he is deeply involved in dealing with Russia oligarchs and others. Whether that's good, bad or indifferent it's probably the reasonable surmise.

The Democratic Party needs to keep pushing this story. What is the connection between Trump and the Russian billionaires and their puppet master, Putin? Follow the damned money. Every time Trump goes on television, someone needs to ask him how much money he owes Moscow.

If you thought it was bad for Mitt Romney to keep his money in the Caribbean, wait til you see how much cash Trump owes the Russians.

Reacting to the mounting fury over Donald Trump's friendly stance toward Russian President Vladimir Putin, a spokeswoman for the Republican presidential candidate denied Monday that Trump has “any business dealings” in or with Russia.

The statement from Trump press secretary Hope Hicks did not address questions about Russian money in the real estate mogul’s businesses in the United States or elsewhere outside Russia. His son Donald Jr. said eight years ago that Russian investors had put plenty of money into the family’s enterprises.

“Russians make up a pretty disproportionate cross-section of a lot of our assets,” Donald Trump Jr. said at a real estate conference in 2008, according to an account posted on the website of eTurboNews, a trade publication, cited by The Washington Post. “We see a lot of money pouring in from Russia.” The statement was not meant to imply that Russian government money was invested in Trump enterprises.

The problem with anything the campaign says is this--Trump has been running his mouth since the Nixon Administration. Anyone with a brain can see that he's in hock to the Russians. The only question is, will the media really start to drive this story? James Fallows has already received comments from people who cannot believe that this is not a front page, round-the-clock story.

I certainly hope so because no one should assume Trump is innocent until he releases his tax returns.