Where Were You When the Democratic Party Needed You? 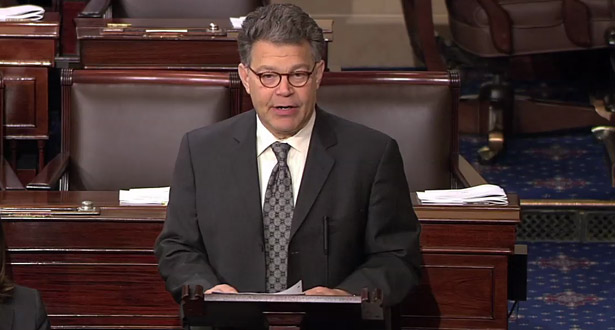 In spite of all of the opposition to gun control in this country from politicians (people WANT common sense gun control legislation), a group of Democratic Senators won a huge victory. They won the right to put it to a vote and to hold the Republican Party accountable.

My old home state of Minnesota made me very proud last night. Amy Klobuchar and Al Franken showed up on the right side of history and put their political futures at risk. In Minnesota, there are a lot of liberals. But there's also a segment of the population that is fervently anti-gun control and with Minnesota being the sportsman's paradise, you cannot ignore the threat that Klobuchar and Franken will face in the years ahead when they come up for re-election. Franken is particularly vulnerable, given his previous close races.

I am happy that Bernie Sanders tweeted this:

And I praise him for it. He knows he has issues with gun control and he knows he has to move to the left. But the Washington Post noted that he should have shown up:

Before Sen. Chris Murphy (D-Conn.) headed to the floor yesterday to begin a marathon gun safety speech, his office reached out to members of the 46-member Democratic caucus. By the end of it, early Thursday morning, Murphy announced that the Democrats would get votes on Sen. Dianne Feinstein's legislation to prevent people on the terror watch list from buying guns, and his own legislation to expand background checks. Thirty-eight of his fellow senators joined the filibuster, allowing Murphy to rest, reading comments from the Internet or describing mass shootings in their own states.

Not among them: Sen. Bernie Sanders of Vermont. The runner-up in the Democratic presidential primaries was in Burlington, Vt., ahead of a simulcast speech to supporters today. (He is not expected to concede.) He'd been in Washington the night before the filibuster began, for the Democratic luncheon and a meeting with Hillary Clinton, but he was not able to return to the city.

Here's the thing--if you want to keep fighting for the Democratic nomination, you actually have to show up and be a Democrat. They may not have needed his vote, but they needed his physical presence as a show of solidarity. I know he's not going to run as a Democrat when his Senate seat comes up--he's already filed to run as an independent--but he needs to come into the fold and start acting like the Democratic Party is where he wants to function. It's a cliche, but you gotta show up. Last night was a move by the Democratic Party to demonstrate that they are the party of reason in Congress. They are the ones representing the people, not the gun lobby. We needed everybody, and we didn't quite get that.

You're telling me he could put out a simulcast to his supporters from Washington D.C.? Please.