Trump's Racism is Why They Love Him 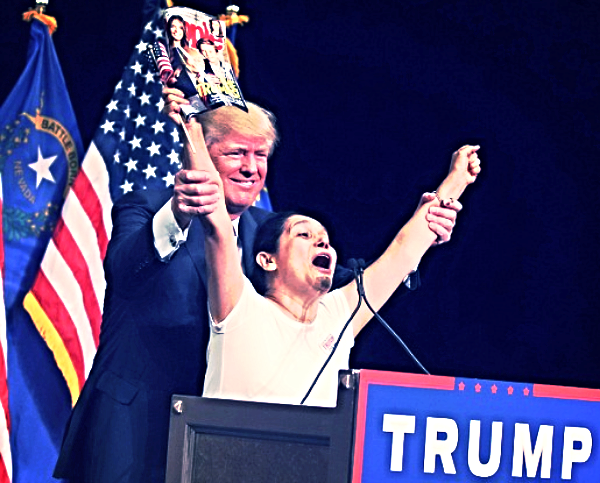 Someone in the Republican Party woke up after what seems like five years of non-stop complaining and discovered that this Donald Trump fellow might be a little racist:

Top Republican officials and donors are increasingly worried over the threat Donald Trump's attack on a judge's Mexican heritage could pose to their party's chances in November -- and about the GOP's ability to win Latino votes for many elections to come.

Trump is under fire for repeatedly accusing U.S. District Judge Gonzalo Curiel, who is overseeing a lawsuit involving Trump University, of bias because of his Mexican heritage. Those concerns intensified Sunday after Trump said he would have the same concerns about the impartiality of a Muslim judge.

House and Senate GOP leaders have condemned Trump's remarks about Curiel, while donors have openly worried that losing Latino voters could doom them in key down-ballot races. Other important party figures, including former Speaker Newt Gingrich, are urging Trump to change his combative, confrontational style before it's too late.

Trump has been winning with whatever it is he's been doing, so it is unlikely that he he'll change because a bunch of people who have "lost" the GOP race in the past are complaining about his style. But there's a deja vu quality to all of this--these stories have been running non-stop since before the New Hampshire primary. Trump's racist comments have drawn fire, repeatedly, and they haven't cost him anything at all. In fact, they've been part of a winning strategy--excite the GOP base by playing to its own inherent racism and push back against the media with claims of "political correctness."

This has rendered political correctness all but irrelevant in the discussion. For a vast group of Americans, you can speak badly about racial groups and get away with it--they are barely human in their eyes, which is horrifying and chilling. For these same Americans, you can denigrate judges because their own experience with a judge is either in traffic court or family court and that's at the local level. They have no idea what the Federal judiciary does or why it exists. Trump is not going to stop doing either one of these things because he's winning with this strategy.

For Donald Trump, the Feds exist as a thorn in his side, and they exist to give the people he has swindled some recourse against him. Think about the last thirty years--Trump has been sued numerous times by people who believe he has ripped them off. Trump has been forced to give untold numbers of depositions and he has a string of lawyers as long as your arm on retainer, constantly fighting back against the courts. In New York City, he's a running joke as a developer. He can issue attacks against Federal judges because he really does believe that they are there solely to ruin his enjoyment after swindling someone out of money or forcing the government to take pennies on the dollar in judgements rendered against his businesses. He went to China, tried to business with them, and ended up humiliated, which has fed his racist views ever since.

Where were these people when this guy was calling Mexicans rapists? It has been eleven months since Trump let loose with a string of invective and the only consequence of it was being handed the nomination for the presidency over the charred corpses of more than a dozen serious challengers. These people love their racism, and they're not listening to a few elite GOP members of Congress.

The Democratic Party needs to start running ads and drive home the fact that Trump is the most outspokenly racist candidate in modern memory (most Americans don't remember George Wallace or Strom Thurmond). This is a self-evident truth that needs to reach every voter--Trump has to be stopped, and the media and the GOP establishment failed to stop him when they should have but didn't because they both love and embrace racism. The GOP loves it because it turns out their base; the media loves racism because it feeds them with the content that whips people up and engages people on social media.