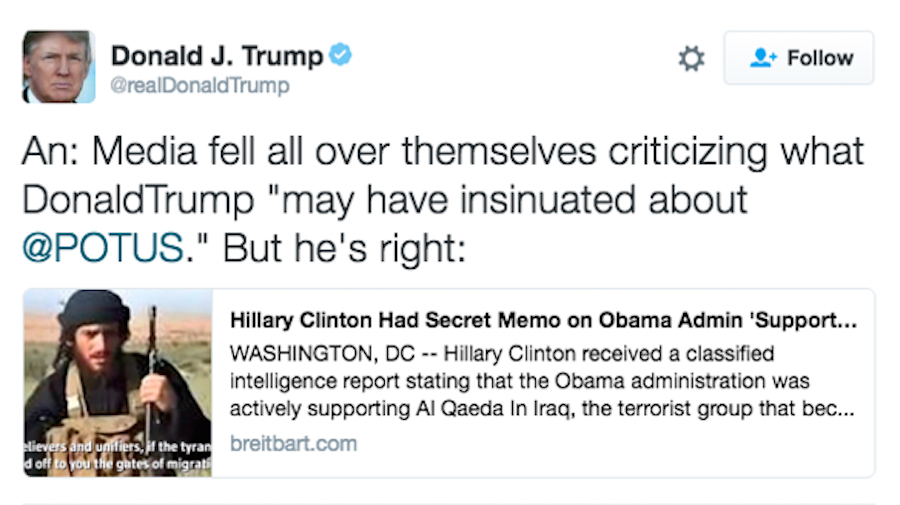 Donald Trump does not respond to trouble the way a normal politician would. He simply lies and throws chum in the water in the hopes that he can wait out the 24-hour media cycle for a chance to talk about something else:

The Breitbart article is based on a memo that was widely discredited by people with knowledge of ISIS and Syria when it appeared last year. See this and this and this.

Trump’s assertions were of a piece with his “birther” crusade during Obama’s first term, and his recent lunatic suggestion that Ted Cruz’s father might have been in cahoots with Lee Harvey Oswald. In all these cases, his approach is to say “there are a lot of questions” and “people are thinking” and “a lot of people want to know,” and use that as support for his wholly unsubstantiated claims.

That's from James Fallows, who is doing the country an enormous service by carefully documenting, in almost real time, the absolute unhinged insanity that is the Trump "campaign" right now. I cannot call it an actual campaign for the presidency because Trump has no organization, no infrastructure, and no standing with the press that corresponds to what has gone before. He is running for President by Tweeting things that occur to him and he's incapable of being self-aware about the impact of his efforts.

Much of what Fallows is documenting will be in dispute this fall. Dutiful liberals like myself will point out that Trump has said some really, really crazy shit. Opinions will differ. Our mainstream media outlets will be on their best behavior so that they are not banned from covering his campaign and cutoff from all the rich content he provides. The American people will not be informed by any of this. And yet, as Fallows points out, these are things that are actually being said and they're crazy. The statements that Trump is making are absolutely without any precedent and are off-the-wall nuts.

Trump has accomplished the impossible--he makes George W. Bush look like a sophisticated statesman and a more than credible individual who ran for and won the presidency. He is so bad he makes Bush look like a responsible adult who had some measure of understanding as to how the world really works.